Although they didn’t get the result they wanted, Manchester United put in a much better performance in the 0-0 draw against Chelsea on Monday.

Ander Herrera made Man United tick in the No.10 role, Anthony Martial terrorised Branislav Ivanovic on the left hand side and Morgan Schneiderlin dictated things in the middle of the park.

Louis van Gaal may be tempted to play the same starting XI against Swansea City next time out as he looks to end United’s eight game winless streak in all competitions: 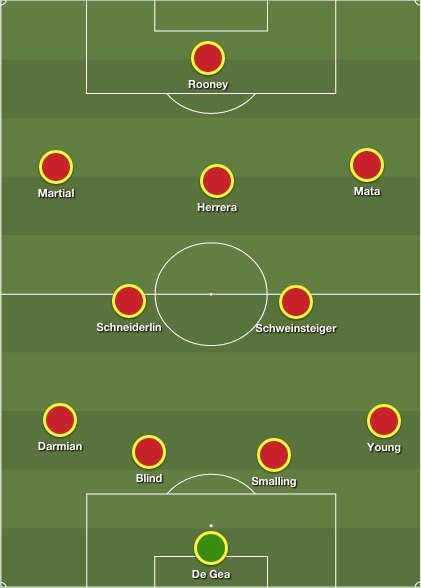 The first half against Chelsea, in particular, saw United play some of their most exciting football of the campaign.

Perhaps Jesse Lingard may feature if he returns to fitness in the coming days, but it would be no surprise to see van Gaal keep things as they are.

The under fire Dutchman desperately needs a win if he is to keep his job and changing the team may result in some of the slow, turgid play United supporters have had to endure in recent weeks.