Manchester United’s Jesse Lingard has been sidelined for the past few weeks due to injury but he will be hopeful of returning to the starting XI against Swansea City next time out.

Lingard had been enjoying a run in the first-team prior to picking up an injury against Bournemouth and he had impressed for Louis van Gaal’s side.

His inclusion in the starting XI against Swansea may lead to Anthony Martial starting up top, which means Wayne Rooney would drop to the substitute’s bench: 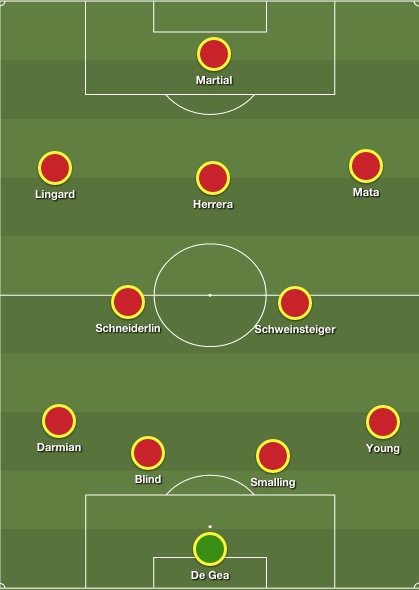 However, the Man United captain put in a good display against Chelsea on Monday and van Gaal will be reluctant to leave him out.

Elsewhere, Ander Herrera will be looking to continue in the No.10 role against Swansea as he was in good form there against Chelsea.

With Morgan Schneiderlin and Bastian Schweinsteiger behind the Spaniard, Herrera seems much more confident in making United tick and trying to make things happen in the final third.