Home » Manchester United’s Strongest 4-3-3 vs Southampton including Herrera in No.10

Manchester United’s Strongest 4-3-3 vs Southampton including Herrera in No.10

Having taken a look at some potential XI’s for Manchester United ahead of this weekend’s game against Southampton, here’s what I think is the strongest XI we could put out.

First thing you’ll notice is the 4-3-3 formation. I really don’t know why Louis van Gaal hasn’t used this more often, given it is the formation he has effectively built his career on, but I definitely think it gives the best possibility for free flowing, attacking football with pace.

I don’t want to put Anthony Martial on the right-hand side but I want to get Memphis Depay in this starting XI and feel the Frenchman can handle the right far better than Memphis, hence why he has been placed there. After his performance against Liverpool, Jesse Lingard should be rested.

This 4-3-3, with Morgan Schneiderlin and Bastian Schweinsteiger playing in deeper roles, allows Ander Herrera to have the creative freedom in the No.10 role which made him so effective against Newcastle United, so I’d love to see that happen this weekend.

Up front, Wayne Rooney leads the line. He now deserves his place in the team, rather than being given it simply because of who is, and I hope he can continue his goalscoring run of form against Southampton. 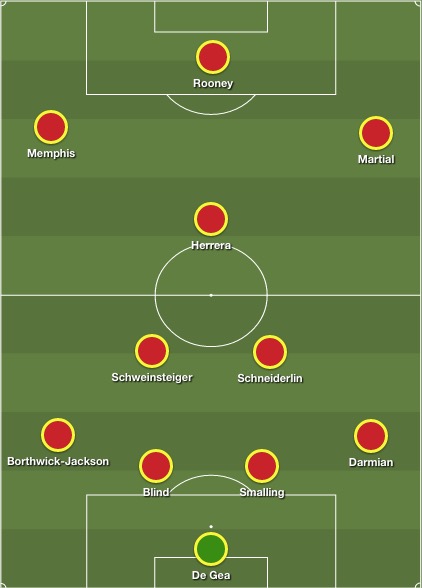 Do you think this is Manchester United’s strongest potential XI vs Southampton? Let us know in the comments!