Potential Manchester United XI vs Derby: No Schneiderlin or Rooney

Manchester United’s game against Derby County on Friday is a game where we are very likely to see some changes by Louis van Gaal.

With Stoke visiting Old Trafford only a few days later, van Gaal will need to rotate his squad and I think we may see both Wayne Rooney and Morgan Schneiderlin dropped because of that.

Rooney’s wife Coleen also gave birth to their third son at the weekend, so van Gaal may allow him to stay with his family with the Stoke game in mind as a return. It would also give Anthony Martial a chance to play up front and I always enjoy watching him play there as I do feel it’s where he will play for the majority of his career. 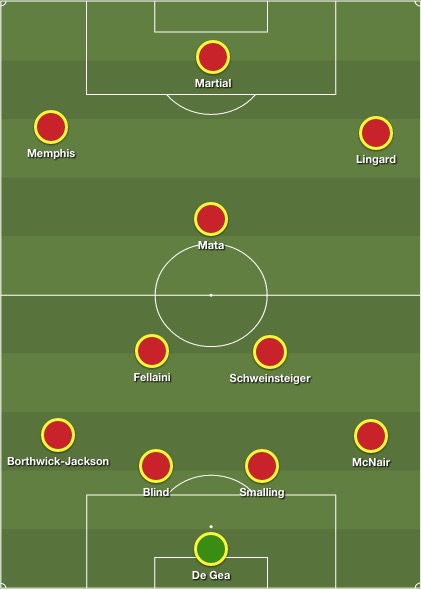 I really, really don’t want to see Marouane Fellaini starting in midfield at any point for United this season but if Schneiderlin is rested and Bastian Schweinsteiger still hasn’t recovered from his injury woes, then I’m not sure what other options we have.

What do you think of this potential XI against Derby County? Let us know your thoughts in the comments.