Manchester United head to the Stadium of Light on Saturday for their second away game in succession after a 1-1 draw with Chelsea at Stamford Bridge.

Morgan Schneiderlin came off the bench for the last 15 minutes and Bastian Schweinsteiger was once again absent having not recovered in time, but we’re lining up in this potential XI to face Sunderland with both of them back in midfield.

For large parts of this season, I was convinced the ‘Schmidfield’ was our best partnership in the middle and although Michael Carrick‘s recent performances have given me food for thought, I do still think the Schmidfield has a lot to offer. 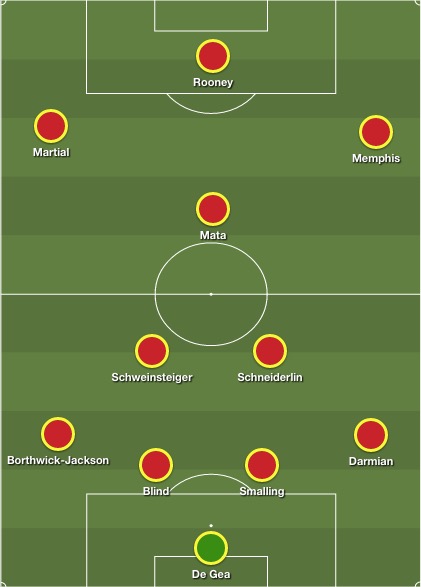 It all depends on Schweinsteiger’s fitness and maybe Louis van Gaal would prefer to play him with the U21s before bringing him back into first-team action, but it’s interesting to look at the options we’ve got. When everyone is fit, we’ve got a very strong central midfield – certainly a far cry from playing Rafael and Park ji Sung against Blackburn only a couple of years ago.

Let us know in the comments what you think about this potential XI!