One frustration lots of fans have had about Manchester United this season is Louis van Gaal‘s persistence with a formation that has two defensive midfielders, regardless of our opposition.

So, here’s a potential XI which sees Morgan Schneiderlin sitting as the sole defensive midfielder with Juan Mata and Ander Herrera in front of him in a midfield three.

It’s the sort of formation which would definitely get the best out of Herrera as he thrives in a midfield three situation. Mata is questionable in that role because it forces more defensive responsibilities onto him which is the weakest part of the game.

A lack of bodies in defensive midfield who also force United to play the ball up the pitch faster which would lead to a more aggressive style of play geared towards attacking with intent rather than stagnant possession. After all, the 4-3-3 formation was van Gaal’s forte until he had to switch to a 5-3-2 with the Netherlands for the 2014 World Cup due to injuries. 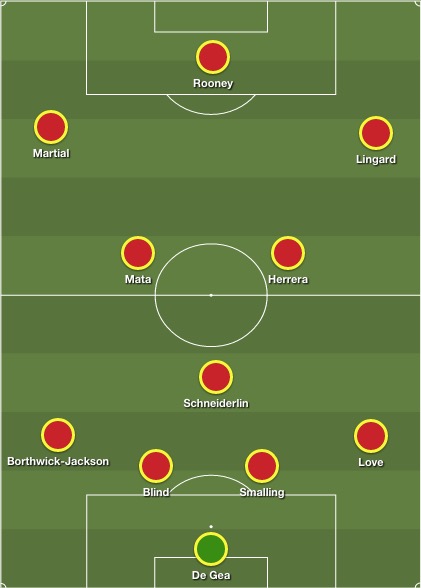 I’d love to see United adopt a 4-3-3 formation and go for it. Our team is so much better than Midtjylland’s, so we should look to push that advantage with a formation aimed at attacking.