Manchester United manager Louis van Gaal will be desperate for a win over West Bromwich Albion on Sunday as his side look to gatecrash the top four of the Premier League.

Wednesday’s 1-0 win over Watford saw Man United move level on points with fourth-placed Manchester City, although Manuel Pellegrini’s side have a game in hand.

Marcus Rashford and Anthony Martial both grew into the game against The Hornets and van Gaal will be tempted to start them both again at the Hawthorns: 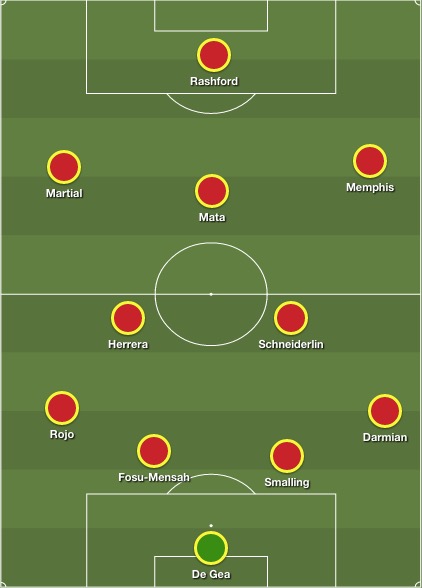 Meanwhile, Daley Blind’s awful display at centre-back against Watford may lead van Gaal to line up with a partnership of Timothy Fosu-Mensah and Chris Smalling, although the latter is a doubt for the trip.

Fosu-Mensah has performed admirably in his two games in the United first team and it would be interesting to see how he would work with Smalling.

Finally, Matteo Darmian will be hopeful of securing a spot in the starting XI over Guillermo Varela.