Marcus Rashford has been a breath of fresh air for Manchester United in recent weeks but Louis van Gaal may well be thinking about dropping him for the Europa League tie against Liverpool on Thursday.

Rashford made a minimal impact against West Bromwich Albion on Sunday, although he, along with the rest of the team, wasn’t helped by Juan Mata’s early dismissal.

With a big European tie at Anfield a daunting prospect, van Gaal may be tempted to go with the more experienced option in Jesse Lingard, which would allow Martial to move up top, where he looked Man United’s most dangerous player against West Brom: 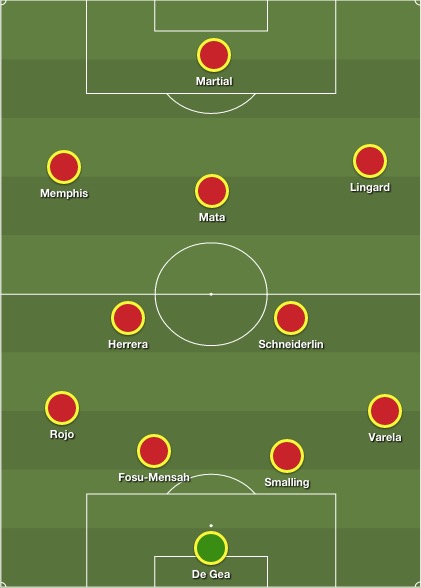 Elsewhere, Timothy Fosu-Mensah will be hoping to start at Liverpool.

Daley Blind would be the ‘safe’ option for van Gaal but the Dutchman has played a lot of football recently and he was not close enough to West Brom’s Solomon Rondon before he scored the winner on Sunday.

Guillermo Varela, too, will also be pushing Matteo Darmian for a place in the team as the Italian was disappointing at The Hawthorns.