Louis van Gaal’s tinkering with his player’s positions reached ludicrous levels on Sunday as he chose to play Ashley Young up top in the second half of Manchester United’s 3-0 defeat against Tottenham Hotspur.

Young had only just returned from a long-term injury and he understandably offered little as Spurs comprehensively beat Man United at White Hart Lane.

Meanwhile, Anthony Martial, who can play up top, was used on the left wing. Jesse Lingard, a winger, was playing as a No.10 and Juan Mata featured on the right. It was madness to see as a fan and unsurprisingly didn’t work.

Van Gaal has put square pegs in round holes for the majority of his time at United and it would be good to see him just be sensible with his starting XI for the FA Cup clash against West Ham United on Wednesday: 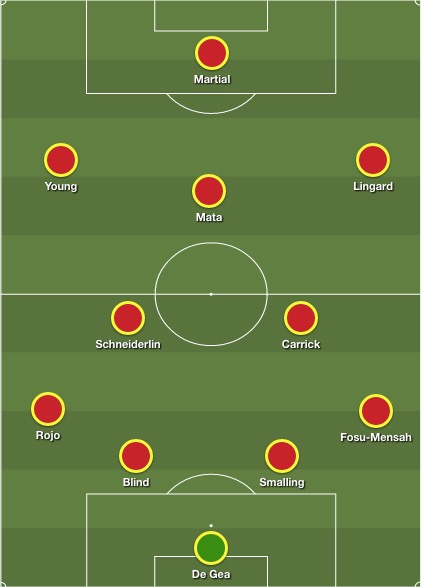 Van Gaal’s bizarre tactics and team selection have left United in a dire position this term and the Dutchman will surely be sacked if he fails to beat West Ham. Although, we’ve said that plenty of times this season and nothing has ever happened so probably not.

The only player that really helped his reputation on Sunday was Timothy Fosu-Mensah and he will be hoping to continue at right-back but he picked up an injury against Spurs, so isn’t certain to start. Typical.