Marouane Fellaini was included in the Manchester United line-up against West Ham United on Wednesday to add some physicality in the middle of the park and the Belgian did an excellent job at Upton Park, scoring as his side secured a 2-1 win in the FA Cup.

However, it’s fair to say that Man United won’t face too much of a test against Aston Villa on Saturday and Morgan Schneiderlin might be reinstated to the starting XI to provide some class at Old Trafford.

United generally look more of a composed unit when Schneiderlin plays and his work may prove to be crucial as they look to overwhelm Villa early on: 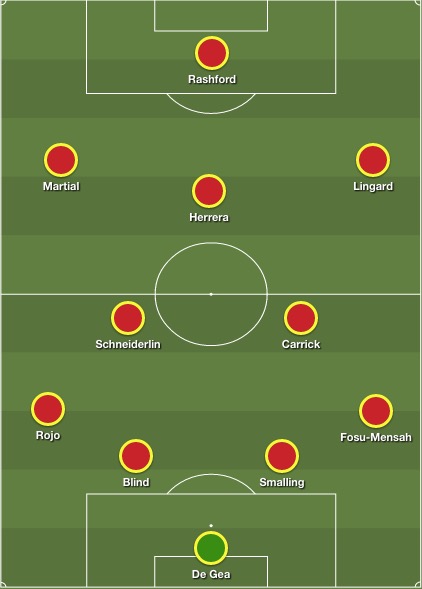 Elsewhere, Ander Herrera will be looking to continue in an advanced position against Villa.

Juan Mata hasn’t been in the best of form recently and he was deservedly dropped for the game against West Ham.

Villa, bottom of the Premier League, have been awful for the majority of the season and United should secure an easy win but Louis van Gaal’s side have been anything but predictable this term.