Louis van Gaal has praised Manchester United fans for their invaluable support towards the club each week in his message to supporters in this season’s renewal pack.

Man United are now challenging for silverware for the first time since Sir Alex Ferguson retired in 2013 and although success in the FA Cup could strengthen his case to stay on Old Trafford next year, he recently admitted his job was in the hands of the board.

The Dutchman’s future has come under heavy scrutiny since the start of the campaign, with Jose Mourinho being continually linked with the job. However, there’s no indication from van Gaal at the moment that he intends to walk away from it.

In his notes to supporters in this season’s renewal pack, van Gaal said: “There is no doubt in my mind that Manchester United has the best fans in the world, and the relationship between the team and the fans is very special. The passion and atmosphere at Old Trafford, which was famously named the Theatre of Dreams by Sir bobby Charlton, is incredible and it makes me extremely proud to manage this club.

“It is my utmost ambition to bring success to this Club and, for you, the loyal Season Ticket holders who support the team week in, week out. Everyone is working hard to get the Club back to where it belongs. Your help along the way has been invaluable and is greatly appreciated by the players.” 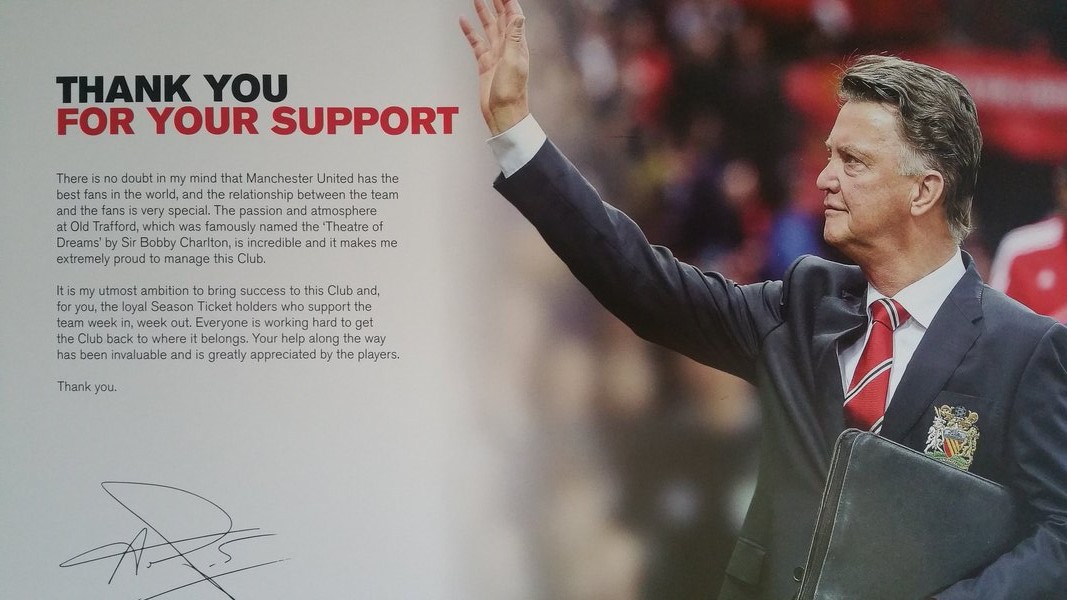 It’s clear van Gaal is targeting a win in the FA Cup as it would be our first major trophy since Sir Alex retired but does it make up for what has been an underwhelming season in the Premier League after such promise last? I’m not so sure.

Recent improvements haven’t done much to quieten the speculation surrounding his future as missing out on the Champions League next year is still likely, despite reducing the gap on Arsenal and Man City to five points with a game in hand.

However, if United win the FA Cup and manage reach top four this season, would that give grounds for keeping the Dutchman at Old Trafford until the end of his contract?