Louis van Gaal’s decision to employ a 4-1-4-1 formation in recent weeks has seen Manchester United put in a number of positive displays and the Dutchman will be tempted to keep the system for the clash against Leicester City this weekend.

Man United most recently used the formation in the 2-1 FA Cup semi-final win against Everton and they were much brighter from an attacking perspective than they have been at points this season, particularly in the first half.

Wayne Rooney seems to be enjoying a new role in midfield, while Morgan Schneiderlin’s disciplined shifts in a holding role have given his side a good platform to build on. Supporters could see United line up in a similar way on Sunday: 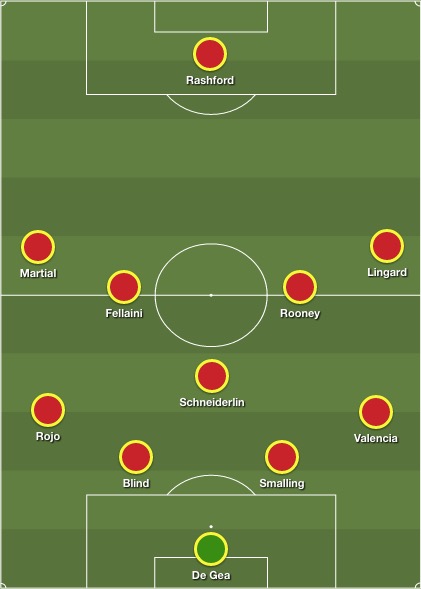 Schneiderlin and Marouane Fellaini provide a physical presence in the system, which allows Anthony Martial and Jesse Lingard more space to get on the ball.

Leicester will be organised and efficient as they look to secure the Premier League title with a win at Old Trafford and it is important that United get themselves on the front foot early on.