Heads are turning towards the Portuguese press every day for an update on Renato Sanches and this morning Record haven’t disappointed.

Record have published fresh reports based on their own information that Manchester United are willing to pay €40m up front for Sanches with another €40m in bonuses and they support O Jogo’s claims Benfica’s president Luís Filipe Vieira was in Manchester this week to finalise negotiations over the 18-year-old.

Up until this point there have been a host of different valuations put on Sanches, including €60m from O Jogo yesterday, but this is the first time €80m has been mentioned, although it is the value of his release clause. 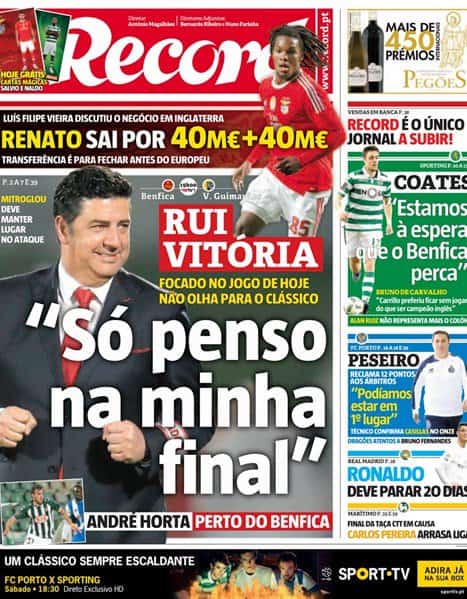 The fact Sanches’ agent is Jorge Mendes, who represents Jose Mourinho, has also been cited as justification behind United’s interest in the 18-year-old and Record say a deal is likely to be pushed through before Euro 2016.

It’d certainly be in United’s interest to finalise a deal before Euro 2016 because Sanches is likely to earn a place in Portugal’s squad and international tournaments are notorious for increasing the prices of players. Alternatively, some might feel waiting is a risk which could pay off if Sanches doesn’t impress.

In terms of the price tag on Sanches, the add-ons will probably be similar to Anthony Martial. United will have to pay extra to Monaco once he hits certain goal achievements as well as any potential Ballon d’Or nomination and we’d be happy to pay either of those because it means he’s smashing it as a player. The same could be said of Sanches and bonuses which would be attached to him.

As far as I’m concerned as a fan I couldn’t care less how much we paid for Sanches as it’s not my money and it certainly looks like we’re the most likely to sign him.