Marouane Fellaini may face a retrospective ban for an alleged elbow on Leicester City’s Robert Huth and Manchester United will likely be without him for the clash against Norwich City next time out.

Huth grabbed a handful of Fellaini’s hair in the clash between the two sides on Sunday and the Belgian responded by elbowing him in his chin and swinging a hand in his face.

Fellaini had a right to be aggrieved with Huth but his reaction was unwarranted and the FA may decided to punish him. If so, Morgan Schneiderlin should come into Louis van Gaal’s starting XI against Norwich City: 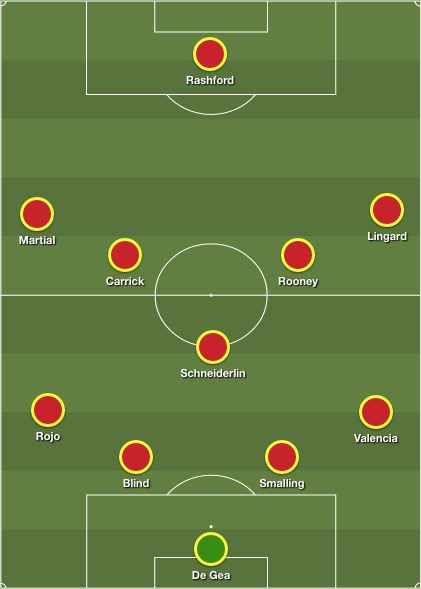 United fell behind in the race to finish in the top four of the Premier League with the draw against Leicester but van Gaal will be keen to push all the way for Champions League qualification.

However, Norwich have problems of their own as they are in the midst of a relegation scrap. The Canaries should provide a tough test at Carrow Road.

As for Fellaini, it is possible that he may have played his last game for United. A three game ban would see his season end and there have been strong rumours that Roma are interested in his signature.