From Portugal: Renato Sanches is ready to join Manchester United

Renato Sanches and his potential move to Manchester United is once again the focus of the Portuguese press this Thursday.

Record have led with a front page splash on their print edition and follow it up with an article saying Renato is aware of the negotiations which are happening and that Benfica are looking to sell him to Man United.

Furthermore, Record says Renato’s mother is also well aware of those conversations but insist the 18-year-old remains focused on winning the Portuguese League with Benfica this season before thinking about where he’ll play next year. 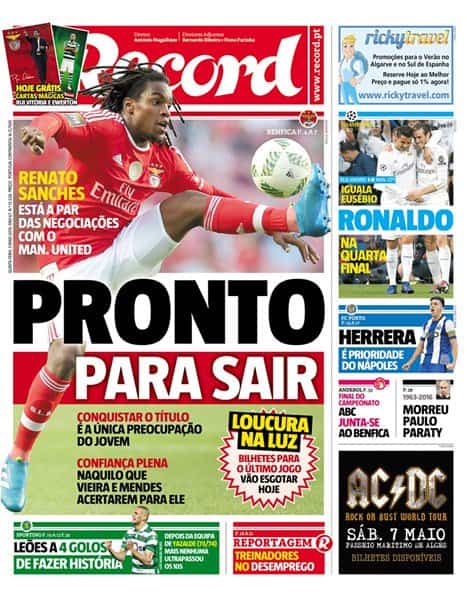 Man United scouts watched Sanches in action for the 24th consecutive game at the weekend but saw a tired, depleted 18-year-old who is starting the show the signs of playing 52 games for Benfica this season while being the player who led the team with his performances. That’s a phenomenal amount of games for a teenager to play and it should come as no surprise to see he’s suffering a dip in form because of that.

As for as the negotiations have gone, Benfica’s coach has insisted Sanches’ future rests with the club president and as United are reportedly willing to pay €80m over a four year period for Sanches, it’s just a case of finding a price both clubs agree with to complete the move.

All the pieces are falling into place as far as the reports have gone and if they are all indeed correct, we may well see Sanches finalise his transfer to United before Euro 2016 where he is expected to play for Portugal.