One question we wanted to take a look at was this – what is Mourinho’s best Man United starting XI out of our current squad? Here’s what I think it is: 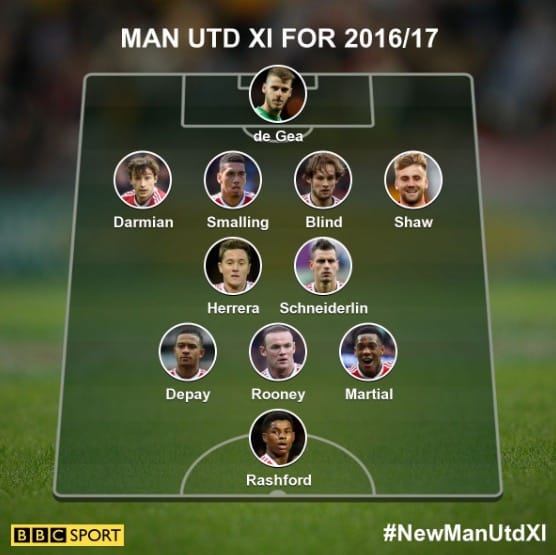 Now, it should be noted this is not what I think our starting XI will be next season but what I feel is our best with the current squad of players we’ve got.

One area I do think could stay like this is central midfield. Morgan Schneiderlin and Ander Herrera could very much mimic the partnership which Nemanja Matic and Cesc Fabregas built at Chelsea; they might not have had much game time together under Louis van Gaal but they offer the sort of dynamism which Mourinho loves in his players.

As for the attack, Jesse Lingard‘s been excellent this season but Memphis Depay has a much higher threshold and is the sort of player who could thrive under Mourinho. After a slow start at United, he’ll be desperate to shine next year as well. As for the other positions, I think they pick themselves.

In defence, I’d be very surprised to see Daley Blind start there next season because, let’s be honest, he’s not a centre-back and Mourinho isn’t a man famed for using players out of position. But, in our current squad, it’s hard to argue past the Smalling/Blind partnerships which proved to be one of our cornerstones this season.

All in all, I’d say we’re only 3-4 players away from having a squad capable of competing on all fronts under Mourinho and this starting XI looks quite good already if you ask me. Want to make your own? You can do it over on the BBC here.