Jose Mourinho has moved quickly to improve the squad he inherited from Louis van Gaal with plenty of speculation surround the signings of both Eric Bailly and Zlatan Ibrahimovic.

Mourinho plays a 4-2-3-1 and requires speed on the wings, creativity in the number ten position and a traditional number nine that can guarantee goals. Looking at United’s potential XI under the Portuguese man, he certainly has that and there is plenty to be optimistic about heading into next season. 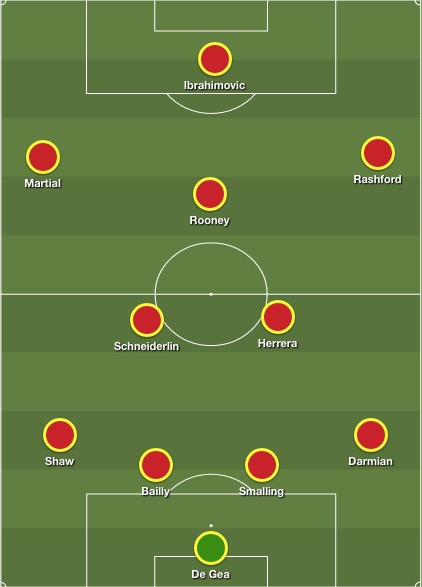 Matteo Darmian had a mixed first season at Old Trafford but with Luke Shaw returning to the back four, could be a part of a formidable defence under Mourinho. Shaw was starting to settle into life at Old Trafford before a calamitous injury ended his season early and with the summer off will be keen to get to work when United meet up after the Euro 2016 tournament.

Wayne Rooney is starting to evolve into a more central midfielder in the latter parts of his career and could be given a new lease on life under Mourinho. Oscar was Mourinho’s first choice number ten at Chelsea and Rooney has many of the same qualities as the Brazilian. His ability to link play, pass the ball out wide to onrushing wingers and getting to ball to Zlatan could be vital in his role. In United’s front four of Martial, Rashford, Ibrahimovic and Rooney, you have plenty of pace, creativity and goals and that could be United’s most potent strength.

Ander Herrera is a fan favourite at United and has kept his best side out even when he was not being given regular enough opportunities under Louis van Gaal. He will get the chance to show what he is worth under Mourinho and will most likely nail down a place this season for United. Herrera is unique in that he offers creativity, energy and offers himself up completely in defensive situations, being a lot stronger than he looks.

One of the problems United might have if the unknown that is Bailly and Smalling as a central pair but with Mourinho making sure his defense is secure before anything else, they will not be as exposed as in other United teams and will be given every chance to gel together over the course of pre-season and the opening rounds of the league.