If history is anything to go by, Manchester United can expect a memorable 2016/17 season if they sign Zlatan Ibrahimovic this summer.

Ibrahimovic has won the league in nine of the last ten seasons he has competed in with Inter Milan, Barcelona, AC Milan and Paris Saint-Germain, respectively.

The Swede also triumphed in Serie A in 2004/05 and 2005/06 with Juventus, but they were revoked due to the 2006 Italian football scandal. And finally, Ibrahimovic won the Eredivisie with Ajax in 2003/04. It is a remarkable record and Man United supporters will be hoping that history repeats itself in the coming campaign: 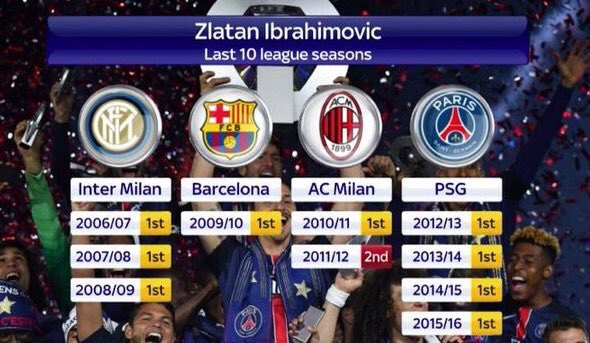 United supporters had to put up with mediocrity for too long under David Moyes and Louis van Gaal and the potential combination of Jose Mourinho and Ibrahimovic at Old Trafford should see a winning mentality return to the club.

Both men have been there and done it when it comes to winning trophies and that is exactly what United need.

Van Gaal, during the 2015/16 season, suggested that supporters should lower their expectations but United as a club have always been about success. Mourinho and, potentially, Ibrahimovic should strive to do all they can to bring back the good times to Old Trafford.