Joel Pereira has been included in Portugal’s squad ahead of the 2016 Olympic games in Rio de Janeiro.

The 20-year-old, who came to Old Trafford in 2012, is yet to feature for the first-team but featured for Rochdale six times during a loan spell in 2015.

But despite a lack of game time at his parent club, the youngster will have the chance to impress on the world stage as the European champions descend on Brazil in early August. 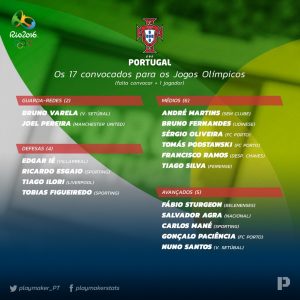 Pereira has been a constant, unflappable presence in the youth side for almost four years. Rochdale manager Keith Hill insisted that he could develop into a “top, top player.” Pereira himself declared that he wants to challenge Sergio Romero and David De Gea for a place in the first team, and the Olympics provide the perfect opportunity for the youngster to do just that.

Joel’s namesake, Andreas Pereira, has unfortunately been left out of the Brazil squad ahead of the Olympic games, having said earlier this year that he was determined to feature in the tournament. His omission from the side means that the 20-year-old is free to travel with the Manchester United squad to China for their pre-season tour, which serves as an ideal opportunity to impress new boss Jose Mourinho.