It’s safe to say Joe Riley isn’t happy at being left out of Manchester United’s pre-season squad by Jose Mourinho.

Man United’s 25-man squad was announced on Tuesday and 19-year-old Riley wasn’t part of it which has clearly irked the 19-year-old.

Riley made his senior United debut under Louis van Gaal but Mourinho felt taking Axel Tuanzebe was the smarter decision. 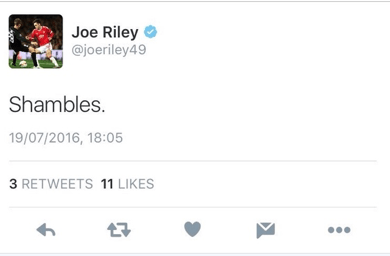 Since sending this message earlier, Riley has deleted it from Twitter and that’s probably the smarter move. Even though he made his debut, the likes of Timothy Fosu-Mensah and Tuanzebe, in my opinion, absolutely deserve their spots in the squad ahead of him and the rest of the players are established senior squad members. Not everybody can go to China.

Instead of seeing this as a knock-back, Riley needs to take it on board and use it as fuel to make him even better. That’s the only way he can force himself into Mourinho’s plans; if he can do well enough on the training pitch then Riley will be given an opportunity to impress, if not then he’ll be playing for our U21s again this season.

Update: Riley has since sent out another tweet saying he was referring to locking his keys in his car. How you read into this depends how cynical you are!

'Shambles' – I locked my keys in my car again 👀😩 #DontJumpToConclusions