Real Madrid defender Raphael Varane has rejected an offer from Jose Mourinho to join Manchester United, according to reports.

Varane made 33 appearances for the Spanish giants last term before a hamstring injury ended his season early in May. 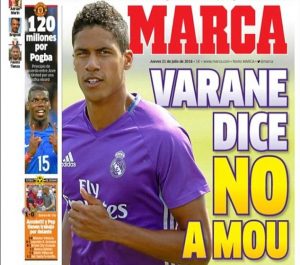 The report claims Mourinho is keen to manage the French centre-back once again, having signed him at Madrid from Lens during his time in charge in 2012.

Mourinho allegedly made his intentions clear to bring Varane to Old Trafford, but after “thinking very seriously” about his proposal, he decided to stay at the Bernabeu.

He could add have added serious depth to United’s defence as he is currently not picking up much game time as third-choice centre-back behind captain Sergio Ramos and the long-serving Pepe.

Man United have already acquired the services of Zlatan Ibrahimovic, Henrikh Mkhitaryan and Eric Bailly this summer, while it looks like Paul Pogba could be joining them, it doesn’t look like they’ll be able to lure Varane to Old Trafford.

Mourinho only outlined four fundamental signings in his first press conference as Man United boss, with the fourth most likely Pogba, but it shows he will always be on the lookout for a way to improve his side ahead of the new seaason.