Sir Alex Ferguson was at Wembley with his wife Cathy on Sunday afternoon to watch Manchester United’s Community Shield fixture against Leicester City.

The former Man United manager looked on with all smiles as Jose Mourinho‘s new side put in a promising performance against the Premier League champions.

Jesse Lingard once again put in a fabulous performance at Wembley after his FA Cup screamer against Crystal Palace, he went on a spectacular run, drifting through defenders and put Mourinho’s side ahead in the first-half. Zlatan Ibrahimovic headed home to make it 2-1 in the 83 minute and help Mourinho’s side see out the victory.

Here’s a look at Fergie and his wife enjoying the game. 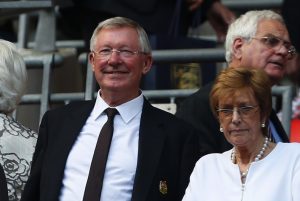 Man United have suffered disappointing tenures under Louis van Gaal and David Moyes but it looks like Mourinho is the right man to finally get the club back to its former glory days.

The club haven’t been able to offer their new signings Champions League football this year, but have still attracted some of the biggest names in football to Old Trafford with Henrikh Mkhitaryan, Zlatan Ibrahimovic and Paul Pogba – even fending off the likes of Real Madrid to secure the Frenchman’s services.

Supporters are strapped for an exciting season at Old Trafford and I’m sure Fergie won’t be the only one smiling as Jose looks to make his mark at the club.