After months of conjecture and reports, Paul Pogba is finally a Manchester United player.

It was thought that the Frenchman – so unfairly ostracised by Sir Alex Ferguson in 2012 – would never pull on a red shirt again, but the arrival of Jose Mourinho, alongside his band of illustrious signings, has turned the 23-year-old’s head.

Now that the speculation is finally over, Man United fans will turn their attention to how exactly Mourinho ought to accommodate Pogba. 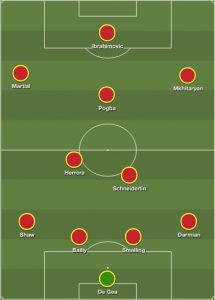 Sunday’s 2-1 Community Shield win over Leicester was positive for two reasons: firstly, United won with a late Zlatan Ibrahimovic winner – something, I’m sure, we could all get very used to; and secondly, it became clear that Wayne Rooney ought to give way to somebody else when it comes to filling the No.10 role this season.

With Zlatan producing some neat touches in front of him, whilst Jesse Lingard and Anthony Martial looked exuberant out wide, Rooney’s immobility, lack of speed and woeful first touch meant that a promising front-line was unable to realise its enormous potential.

Replace Rooney with Pogba and all of a sudden you have a fluid and fearsome attacking front four. Strength and stature, outstanding skill on the ball, sheer vision, control and, most importantly, immense arrogance – these are all attributes that Pogba would bring when placed at the axis of United’s attacking line-up.

Complimented by the raw speed and power of Anthony Martial on the left and the technical prowess of Henrikh Mkhitaryan on the right, Pogba – supported by the forward thinking Ander Herrera and steely Morgan Schnneiderlin just in behind him – has the perfect platform from which to launch attacks and provide chances for Ibrahimovic.

It is a truly tantalising lineup – one that eclipses anything United have produced in the past three years, and perhaps one that surpasses the squad Sir Alex had at his disposal for the latter stages of his reign.