Home » Manchester United vs Bournemouth: Potential XI with with Paul Pogba at No.10

Manchester United vs Bournemouth: Potential XI with with Paul Pogba at No.10

Last Tuesday, Jose Mourinho finally secured the last piece of his jigsaw in completing the signing of Paul Pogba.

The 53-year-old now has his complete desired squad in time for Manchester United’s clash with AFC Bournemouth on the opening weekend of the 2016/17 season.

Speaking in light of Pogba’s arrival, the Portuguese hinted that he planned to deploy a midfield two of Michael Carrick and Pogba.

Here is our predicted XI for the crucial season opener at Bournemouth, featuring Pogba and Carrick at the heart of midfield. 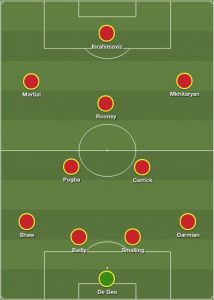 The combination of Carrick and Pogba is an enticing prospect. Going into his eleventh season at Old Trafford, Carrick forms the axis of the side at the base of midfield. He does a speculator job in shielding the defence, recycling the ball and setting up attacks in equal measure, and regularly fails to attract the recognition he deserves for acting as the binding force in midfield.

In this sense, Pogba is the perfect compliment to Carrick’s steady style. Whilst the 34-year-old brings the security, the Frenchman will act as the midfield’s chief source of dynamism and energy. Carrick’s presence will give the Frenchman license to surge up the pitch and pick out the likes of Anthony Martial and Henrikh Mkhitaryan further forward, finding space in between the lines whilst adding steel and power to United’s core.

Whether Pogba – who is yet to have much of a pre-season – starts on Sunday remains to be seen. Either way, the eyes of the football world will be firmly on Dean Court in anticipation for the world’s most expensive footballer.