Patrice Evra has sent Paul Pogba a message over Instagram insisting he will not be clearing out his locker after he joined Manchester United this summer.

The Frenchmen are close friendly and have played together at Man United, Juventus and on international duty with France.

Pogba finalised his world record £89 million move to Old Trafford on Tuesday morning after months of speculation linked him with a Old Trafford move.

Evra took to Instagram claiming he hoped Pogba wasn’t expecting him to bring his belongings to Manchester. 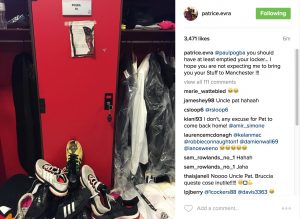 It’s good to see Pogba is still keeping in contact with Evra especially after his well-publicised exit from Juventus this summer.

While fans can’t wait to see him in a United shirt, they’ll have to wait for him to make his long-awaited debut against Southampton as he has to serve a match ban that has been transferred from last season’s Coppa Italia to England.

Pogba’s deal is an incredible piece of business for the club, he has shown his potential as one of the best midfielders in the world at 23 and will only continue to improve during his time at Old Trafford.