Four Manchester United players have made BBC Football Analyst Garth Crooks’ Team of the Week following the 3-1 win over AFC Bournemouth on Sunday.

Luke Shaw, Eric Bailly and Antonio Valencia all featured in Crooks’ back four, whilst Zlatan Ibrahimovic led the line after a thunderous second half performance against the Cherries.

Under Louis van Gaal last season, no more than one player featured in Crooks’ Team of the Week at one time, illustrating Man United’s notable lack of potency throughout the campaign.

But with the Mourinho era just one game old, United players have catapulted themselves back into the Premier League’s elite. 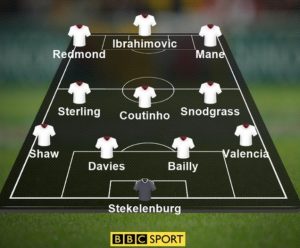 In fairness, that entire back four could very feasibly include Daley Blind as well, such was the emphatic assurance that hallmarked United’s defensive display against Eddie Howe’s side. It was a vintage Mourinho display: an unbreakable defensive shape, an attack ruthlessly capitalising on the first mistake made by the opposition, and a hint of swagger as the result became a foregone conclusion.

Granted, Bournemouth’s attack lacked enterprise and conviction in the final third, but plaudits must go to a back line that held firm all afternoon, somewhat exercising the demons from United’s last visit to the Vitality Stadium last December.