Manchester United made easy work of AFC Bournemouth in their opening game of the 2016/17 season, cruising to a 3-1 victory with goals from Juan Mata, Eric Bailly and Zlatan Ibrahimovic.

Jose Mourinho, buoyed by three victories on the trot, will be looking for a powerful, swashbuckling performance as he finally takes his rightful place in the home dugout against Southampton.

And with new world record signing Paul Pogba now eligible to play, the stage is set for the Frenchman to stamp his authority on the Premier League. 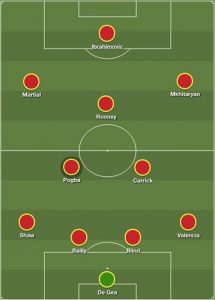 Mourinho hinted towards a midfield partnership comprising of Michael Carrick and Paul Pogba prior to the Bournemouth game. And with Pogba now available for selection, the 53-year-old has a chance unleash the two in midfield, with Carrick sitting deeper and maintaining stability whilst the Frenchman surges forward and wreaks havoc on the opposition.

Some United fans were disappointed to see Henrikh Mkhitaryan only receive a 15 minute cameo against Eddie Howe’s side. The Bundesliga Player of the Year may receive the chance to impose himself from the very beginning against the Saints, offering an alternative dynamic to Anthony Martial from the right hand side.

And after an indomitable and practically faultless defensive display against the Cherries, the back four is likely to remain the same as Mourinho looks to invoke stability and control into the team’s spine.

As a new era begins, with Mourinho, Pogba, Zlatan Ibrahimovic, Mkhitaryan and Eric Bailly all making their Old Trafford bows, Old Trafford promises to be a cauldron of noise on Friday night.