Home » Manchester United vs Southampton: Potential XI with all of Mourinho’s summer signings

Manchester United vs Southampton: Potential XI with all of Mourinho’s summer signings

With world record new signing Paul Pogba, after weeks of sizzling anticipation, now finally able to pull on the red shirt, Jose Mourinho can now unleash his four new signings all in one go.

Eric Bailly and Zlatan Ibrahimovic have made rip-roaring starts to their Manchester United careers, whilst Henrikh Mkhitaryan – last year’s Bundesliga Player of the Season – has had a limited role so far, coming off the bench for short cameos.

But as Jose Mourinho and Co step onto the hallow Old Trafford turf for the first time this season, the Theatre of Dreams promises to be a cauldron of noise and excitement as Man United host Southampton. And there is no better time to see all four of the 53-year-old’s summer acquisitions play together for the first time. 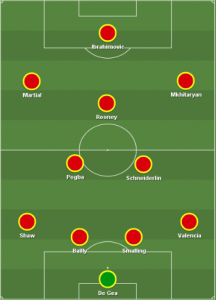 The prospect of Ibrahimovic, Pogba, Anthony Martial and Mkhitaryan lining up together as an attacking force is, well, just too much. Whilst Martial embarks on his second season at Man United, the other three will get their chance to announce themselves to the Old Trafford faithful, impelled by a wall of noise and hope pervading the ground as United fans usher in the Mourinho era with more optimism than ever.

A mention must also go to Eric Bailly, who has grabbed the proverbial jugular of English football during his first few weeks. He will also make his Old Trafford bow, this time alongside Chris Smalling, who returns from suspension.