Zlatan Ibrahimovic and Paul Pogba have been showcasing the new Manchester United era and were pictured celebrating the Swede’s goal over Southampton on Friday night.

Pogba was making his second debut at Man United after completing his world record £89 million move from Juventus earlier this month.

While Ibrahimovic scored twice and helped United cruise to a comfortable 2-0 victory, achieving back-to-back wins for Jose Mourinho‘s side in the Premier League.

The pair have world-class ability and perfectly represent the new team Mourinho is trying to assemble at Old Trafford. 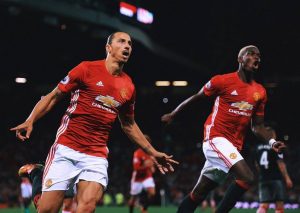 It was an extremely convincing victory and Mourinho’s new signings, dominating play style and impressive start to the season have definitely sent out a message of intent to his rivals.

He has acquired plenty of top quality talent without being able to offer Champions League football this year, but it’s his ability to inspire players and get the best out of them which has been the most impressive factor so far.

Mourinho has taken the side from the middle of the table to favourites to lift the trophy at the end of the season and it’s an exciting time for United fans as they look to get past disappointing tenures under David Moyes and Louis van Gaal.