Starting on 5 August, Manchester United’s U19s played in a high-level tournament consisting of host PSV, giants in youth football like Barcelona, Anderlecht and Paris Saint-Germain and outsiders such as Red Bull Brasil, Borussia Mönchengladbach and Chivas Guadalajara at De Herdgang in Eindhoven. The games consisted of two 30 minute halves and the top two sides of both groups advanced to the semi-finals.

“The amount of times that I was asked who United’s No.10 was ridiculous – everyone was impressed by Angel Gomes and he will turn out to be an incredible player.”

Two new faces were present at the Otten Cup in Tahith Chong who signed from Feyenoord and Joshua Bohui who joined the team from Brentford while Max Johnstone, Sam’s younger brother, was on trial. The club has made two more signings in Lee O’Connor from Waterford and Nishan Burkart from FC Zurich who were for absent for unknown reasons, speaking to Tommy Martin he commented: “Lee O’Connor is currently on international duty with Ireland U17 and Nishan Burkart still needs international clearance.”

The U19s, led by Tommy Martin played in group B consisting of PSV, Borussia Mönchengladbach and Chivas Guadalajara.

Our first match of the tournament was against PSV and Martin chose this starting XI:

The first highlight of the match was a shot from outside the box by PSV’s Dante Rigo that went just wide. United’s first shot was a shot by Ethan Hamilton from inside the box into the far corner but was saved by PSV’s goalkeeper. After 25 minutes, the U19s were slightly on top with possession. From a high Callum Gribbin corner which was cleared by PSV, they quickly counter-attacked ending with Max Dunne unfortunately shooting it into his own net after a good cross by PSV’s Hattu.

The second half started with high pressure from PSV which results in Thomas Sang losing the ball which gives PSV the opportunity to cross the ball in but Tyrell Warren works the ball over Johnstone’s goal. After a good clearance by Sang, Gribbing gives the ball to Whelan who gives a great ball through to Dearnley who got it past the goalkeeper but the ball was cleared on the goal-line by Teze, this was United’s chance to get level.

Substitutions were made by United to get an equaliser with Gomes coming on for Dunne and Boonen for Hamilton but United weren’t able to create another opportunity to score which resulted in a disappointing 1-0 defeat after a decent performance which could’ve gone either way. 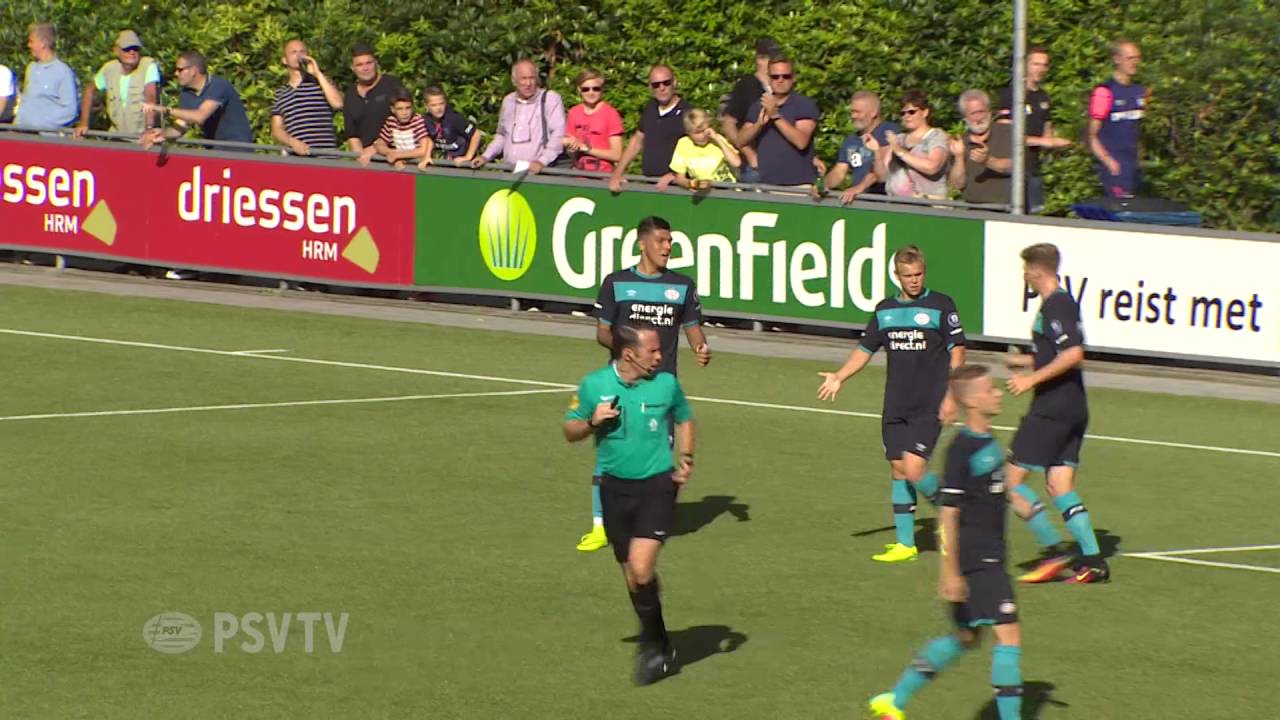 After watching Barcelona play Red Bull Brasil, the team were facing Borussia Mönchengladbach in their second match of the tournament.

Two changes were made to the line-up for this match with Gomes replacing Dunne and Moutha-Sebtaoui coming in for Max Johnstone.

The first action of the game started with pressure from Mönchengladbach on Kenyon and Gomes which resulted in a bad back-pass by Gomes, picked up by Mönchengladbach’s striker Mustafic and he had a first time shot from outside the box but it was blocked by Moutha-Sebtaoui. A great pass from Poole sent Gomes deep who dribbled past the right-back but he was tackled inside the box by Tenbült and the referee gives a penalty. Callum Gribbin steps up to the penalty and sends the keeper the wrong way, United up 1-0.

A quick counter-attack by Mönchengladbach gave Mustafic the chance again to shoot but his shot was again stopped by Moutha-Sebtaoui. Quick combination football sends Chong deep who uses his amazing pace but wasn’t able to get pass the defender and the referee blows for half-time.

Joshua Bohui made his debut for United as he replaces Jake Kenyon who was injured, Hamilton now playing left-back and Bohui on the right-wing. Whelan took the ball in midfield and gave it to Gomes who sent Bohui away, it was good hold up play by Bohui which resulted in Gribbin going past one defender and shooting but his shot was blocked by the keeper. Apart from Gomes’ backpass which resulted in a Gladbach shot, United dominated the game. Gribbin’s penalty secured United’s first victory.

Up next was Chivas Guadalajara who were bottom of the group after losing to Gladbach on the first day and drawing PSV.

Tommy Martin changed up his side again as Bohui replaces Chong, Boonen comes in for Dearnley ,Barlow replaces Kenyon and Tanner comes in as a right-back for Sang. 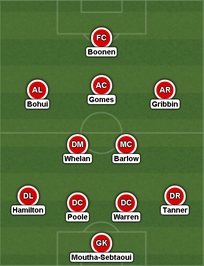 In the first minutes of the game, Chivas striker Padilla was sent through and finished in the corner, United 1-0 down. United needed to at least draw and hope that PSV beat or draw Mönchengladbach in the other game to secure a place in the semi-finals. Gribbin gave a through-ball into the box to Boonen who crosses it in but is blocked by the Chivas defender, United called for a penalty but the referee didn’t give it. Not much else happened in the first half.

Dearnley and Chong have come on for Boonen and Bohui in the second half as United try to equalise. Warren with a great run through the midfield but is tackled just outside the box, Gribbin stepped up to the free kick which headed to the bottom left corner but the Chivas goalkeeper pulled off a very good save.

Later on, Poole picked the ball up in midfield and shot on goal and the ball deflected off Dearnley but the referee gives a corner to United. The corner is picked up by Sang who shoots and eventually finds its way to Aidy Barlow who scored.

As the game continued, Tahith Chong picked the ball up at the corner flag, nutmegged one defender and crossed it into the box but Dearnley shot just wide. In the final stages of the game, Gribbin got a yellow card for a late tackle as the game got more heated, last chance for Chivas as they cross the ball in but it was cleared by United who were now through to the semi-final as PSV beat Gladbach 2-0.

The other group was topped by Barcelona and Anderlecht came second which meant that United were facing a tough tie.

First action of the game came with a through ball to Barcelona midfielder Beltran who was one-on-one with Moutha-Sebtaoui but Warren tackled him and cleared the ball, Barcelona players protested for a penalty but Beltran went down too easily.

Good play by United resulted in a free-kick as Dearnley was pulled down on the edge of the box. Gribbin on it again and a very good free kick which was going to the top corner landed on the bar and the follow-up shot by Whelan goes wide. After some good possession play on the far-side of the field, Angel Gomes found himself in space to send Dearnley through on goal and he finished it off.

Even better play by United on the edge of the box resulted in Gribbin getting the ball and he dribbled through Barca’s defence, sent the goalkeeper the wrong way with a fake shot and put it neatly into the bottom-left corner. United up 2-0. 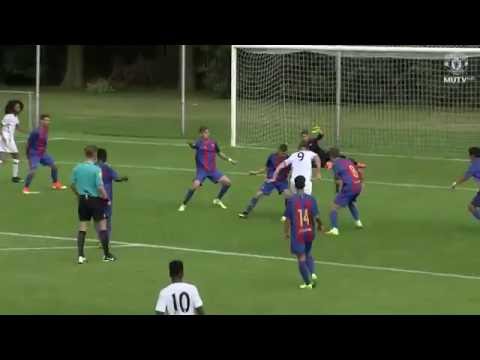 In the second half, bad communication between Whelan and Chong results in a bad pass as Barcelona counter-attacked and Lee went through on goal but was tackled outside the box by Tyrell Warren and even though Poole was still between Lee and the goal; the referee gave a red card to Warren who is devastated, he walked off the pitch with tears in his eyes. Alasana Manneh had a free-kick on the edge off the box but it hit the bar.

United now on the counter-attack as Chong sends Tanner through who crosses it in to Boonen who can’t hold it up and Barcelona look to counter-attack but Queralt is tackled by Hamilton and goes down like he was shot in his foot. Queralt again running down the touchline past Hamilton but before even being touched by Poole, he goes down and the referee gives a penalty which Lee converts. Kick-off is taken by Boonen to Gomes who shoots it as hard as he can and the referee blows his whistle and United is through to the final in which they will face Anderlecht.

After a very tight and tense game, the match ended even and it went straight to penalties.

It was a nerve-racking penalty series. At 7-7, goalkeeper Mile Svilar stepped up because of Loua’s red card and scored the 8-7 and as Indy Boonen steps up for his penalty, he is stopped by the referee because according to the rules Moutha-Sebtaoui would have to take this penalty. A lot of commotion on the sidelines, Nicky Butt and other coaches complaining to the referee, I did not specifically hear why. Moutha-Sebtaoui eventually has to take the penalty, he steps up and he missed. A very unfortunate ending to a very good tournament. 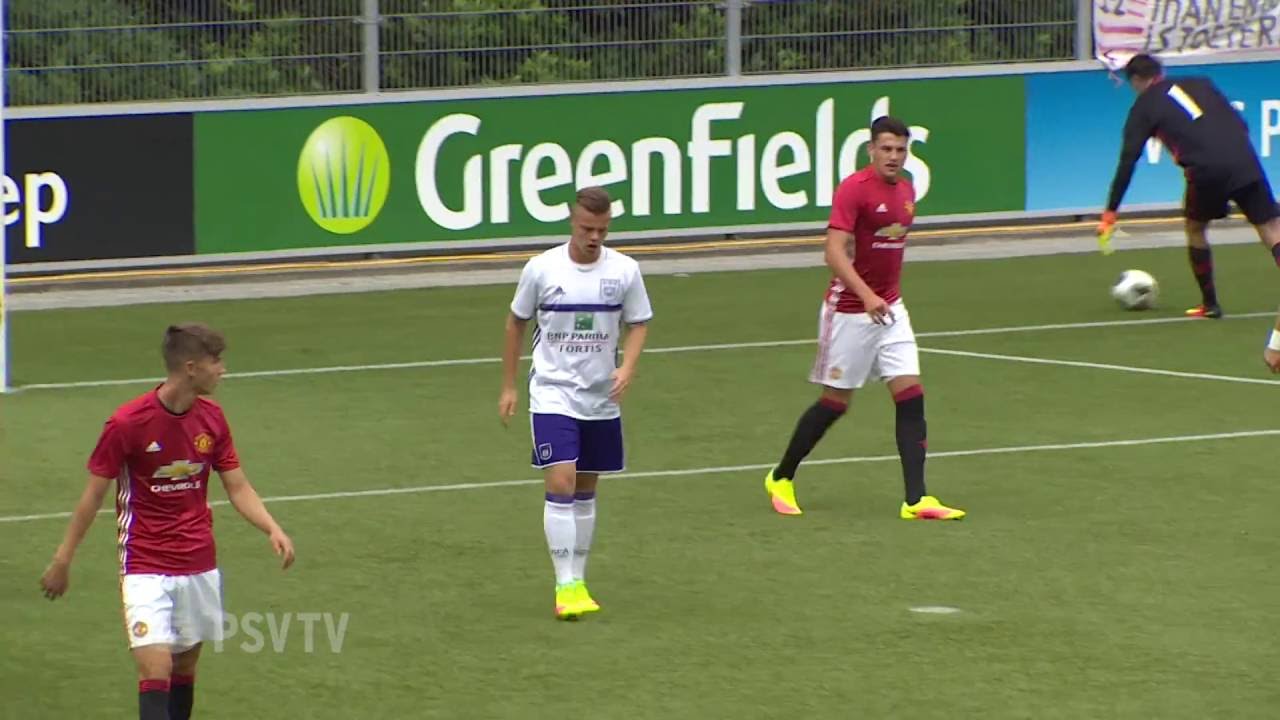 Tahith Chong did end up winning ‘Attacker of the Tournament’.

Nicky Butt was also present at the Otten Cup, I very briefly spoke to him between two phone calls:

“We are looking at a few players and we are working on signing them, so if everything goes well, we are yes.”

He then got called and told me that he had to take that so I congratulated him with Pogba to which he responded ‘Oh yeah, thanks!’

The U18s had the problem last season that when the opposition scored, it was like they just lost the Champions League final, and the team really improved on this front showing the ability to fight even when they’re down so that was good to see.

Even though I had to travel for two hours by train, rent a bike and bike for 15 minutes to see this team play, it was definitely worth it. United had one of the youngest squads of the tournament but they impressed everyone here and the amount of times that I was asked who United’s No.10 was ridiculous – everyone was impressed by Angel Gomes and he will turn out to be an incredible player. Angel Gomes was not the only impressive player, Tyrell Warren was another one, very fast and definitely not scared to tackle. Callum Whelan was also impressive, good at defending but he also has good vision and good passing. The newcomers looked good, they still need to get used to the team but Chong and Bohui looked very good. Barlow and Tanner were the most talented first-year scholars, Tanner was played out of position in every game but still did a decent job and Barlow looked good as well, raw but very talented.