Memphis Depay has been pictured working hard during a midnight training session after being left out of the Netherland’s squad by Danny Blind.

Blind claimed last week that Memphis’ exclusion was down to his recent lack of game time under new boss Jose Mourinho at Manchester United.

The 22-year-old struggled in his opening season at Old Trafford, managing just two league goals, and has only featured once this season from the bench.

Memphis, clearly determined to reassert himself on the starting XI, was seen putting in the hard yards with a midnight training session. 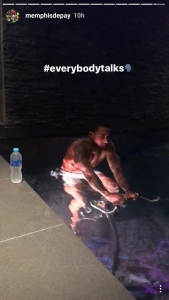 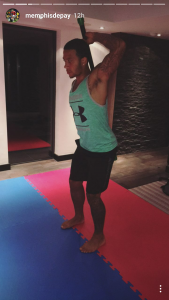 Like most young wingers, Memphis is something of a confidence player. Man United’s No.7 thrives when the game revolves around him, when proceedings are dictated by his mazy style on the ball. Most importantly, though, he requires the unadulterated support of his manager and, of course, the fans.

Last year’s campaign, then, was always going to precipitate a decline in potency for the Dutchman. A hallmark of Louis van Gaal‘s system was a prohibition of placing one player above others in terms of importance, with a strict anti-expressionist attitude. Everyone was subordinate to van Gaal and his methods, leading to Memphis becoming an anonymous – and therefore depleted – figure.

With Mourinho, however, there is a renewed emphasis on expression on the ball, on being able to take players on. Such an attitude will undoubtedly help Memphis, but with the likes of Anthony Martial, Henrikh Mkhitaryan and Marcus Rashford all capable of playing on the left hand side as well, the 22-year-old will have his work cut out when it comes to finding starting opportunities.