Home » Potential XI vs Man City: Jose Mourinho’s options ahead of the derby

Potential XI vs Man City: Jose Mourinho’s options ahead of the derby

On September 10 the football world, for a couple of hours, will stop in unison to watch Jose Mourinho and Pep Guardiola lock horns once again.

Both managers have overseen 100% starts to their time in Manchester, and go into the derby with everything – points, bragging rights, the chance to make an early statement in this year’s title race – on the line. The winner lays down a profound marker, an early benchmark, the first blow in a long, bloody bout for silverware come May.

It was thought that, following Marouane Felliani’s “bad” back injury against Hull City, the Belgian – a crucial aspect of Mourinho’s winning start to the season – would miss out on the contest with Guardiola’s side, severely impairing Manchester United’s powerful core as a result. However, the 28-year-old has reportedly made a “complete recovery”, and is likely to start alongside Paul Pogba for the third game in succession. 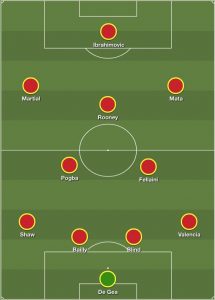 Juan Mata retains his place on the right hand side as both Jesse Lingard and Henrikh Mkhitaryan continue to recover from their respective injuries.

Luke Shaw was withdrawn from the England side prior to their World Cup qualifier with Slovakia on Sunday, prompting concerns over his availability for the derby. However, Sam Allardyce insisted that the 21-year-old’s omission was strictly precautionary, making it clear that he would be fit in time for the derby.

Antonio Valencia arrives back in Manchester from international duty with Ecuador just a day before the derby, but ought to keep his place in the starting XI after making a blistering start to life under Mourinho.