Photo: Paul Pogba’s new boots ahead of the Manchester derby

Pictures of Paul Pogba‘s new boots ahead of the Manchester derby on September 10 have been revealed by Adidas.

The French midfielder has made a strong start to his Manchester United career since his world record move in August, orchestrating the midfield in wins against Southampton and Hull City.

Pogba will face his biggest so far when Pep Guardiola’s Manchester City visit Old Trafford in what will be the most explosive derby in years, with both sides hellbent on making the first major statement in this year’s title race.

To mark the occasion, Pogba will sport a new pair of boots, known as the ‘Adidas ACE16 + Purecontrol Viper Pack’, for Saturday’s game. 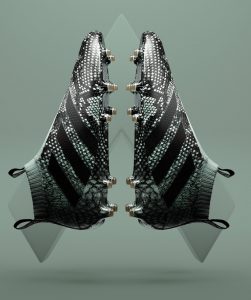 Pogba’s newest accessory only adds to his ‘bad-boy world-beater’ aesthetic. I mean, if Ernst Blofled was to pick a pair of boots, chances are he’d go for these ones.

While a new pair of boots may seem largely trivial in the grand scheme of things, for Pogba, and indeed for Man United, such an addition is reflective of something bigger: a new attitude is germinating under Jose Mourinho, one that commands hatred and fear through sheer arrogance and chutzpah; a regeneration of United tormenting and aggravating the wider football world through winning with a villainous smile.

And Pogba – the man who appears in grime rap videos, sports a snake skin haircut, and bosses any midfield – is the nucleus of this new order.