The Premier League is often described as a ‘marathon’. It is, after all, mentally exhausting, long-term battle of unprecedented proportions, a tussle that ebbs and flows over the course of nine months. Every game is crucial, and yet also just three points out of a possible 114.

The upcoming Manchester derby, however, is far, far more than just the promise of three points. Both Jose Mourinho and Pep Guardiola – renewing their famous rivalry after almost four years – know full well that Saturday’s contest serves as the first opportunity to lay down a serious marker in this year’s title race.

Needless to say, Jose Mourinho will want to field his strongest possible XI, with Paul Pogba and Marouane Fellaini – who returns earlier than expected from a back injury – anchoring Manchester United’s midfield for the third game in a row. 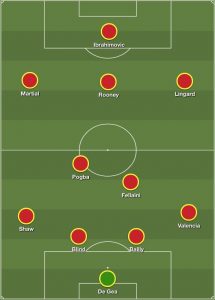 Man United fans will be desperate to see both Marcus Rashford and Henrikh Mkhitaryan feature, but the prospect of either making the starting XI is unlikely.

Rashford, on his England U21 debut, eviscerated Norway’s U21s on Tuesday night, netting a hat-trick without breaking into a sweat. Placing the 18-year-old in the U21s was simply unfair on Norway’s youngsters, and ultimately led to Gareth Southgate’s other attacking options looking, well, a bit substandard. He was simply too good for that level and deserves a more befitting stage in the form of the Manchester derby. Unfortunately, however, the youngster will most likely have to make his mark from the bench, with Anthony Martial keeping his place.

Likewise, Mkhitaryan, another player United fans yearn to see feature in the starting XI, will have to settle for a spot on the bench as he continues to nurse a knee injury sustained against Denmark last week. In his place: Jesse Lingard, who will be preferred to Juan Mata on the right hand side as Mourinho looks to topple Guardiola’s zonally configured system with speed and intensity, ensuring the visitors are placed on the back-foot from the first whistle.