Callum Gribbin has returned to training for Manchester United’s U18s after recovering from injury.

The Salford-born 17-year-old midfielder is yet to play for Man United’s U18s this season having been hampered by a hamstring problem, so it’s fantastic to see him training under our new coach Kieran McKenna for the first time. 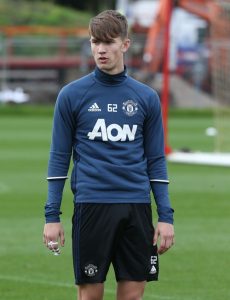 Last season Gribbin was a key player for our U18s and also had an impact with the U19s too during the UEFA Youth League group stages. In 26 starts last year for the U18s he scored five goals and grabbed four assists as well.

Needless to say, Gribbin is delighted to be back in training:

There’s a lot of spotlight on Angel Gomes for his exploits with our U18s this season but Gribbin is certainly one to watch out for as well. Hopefully with his injury frustrations behind him, Callum can now kick on and make the most of the season ahead of him.

With United flying high atop the U18s Premier League things are going well for McKenna since his move from Tottenham Hotspur and having Gribbin available again only makes his squad even stronger. Welcome back Callum.