Zlatan Ibrahimovic has proven to be the only Manchester United player worthy of a place in Gary Neville‘s ‘Team of the Season so far’.

The Swede, since joining in July, has netted 16 goals under Jose Mourinho, and goes into the Christmas period with a superb record of ten goals in his last nine games.

He has excelled at Old Trafford this season alongside the likes of Antonio Valencia, Michael Carrick, Ander Herrera and Paul Pogba. 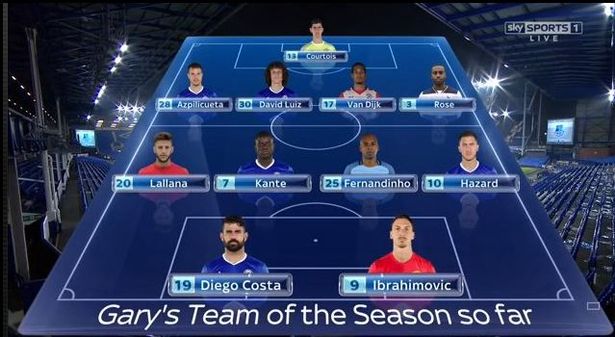 Zlatan’s place in Neville’s ‘Team of the Season so far’ is unchallengeable. The last player to replicate the 35-year-old’s tally at this stage of the season was Ruud van Nistelrooy, and the striker hasn’t displayed any signs of slowing down any time soon.

Many questioned whether, at the age of 35, Zlatan could match the physical demands of the Premier League upon his arrival in July – a query he has answered in emphatic fashion. Zlatan has only missed one league game so far this season, seemingly growing in stature and menace as the weeks go by.

His presence at the mouthpiece of United’s attack brings Mourinho’s desired approach to life: ruthless, aggressive, highly professional, with a tint of arrogance on the side.