Home » How Antonio Valencia has improved at Manchester United this season

How Antonio Valencia has improved at Manchester United this season

There was a time, not so long ago, where Antonio Valencia would be a regular recipient of censure from Manchester United fans.

His story, prior to this season, went something like this: signed from Wigan Athletic in 2009, impressed under Sir Alex Ferguson, enjoyed a rip-roaring 2011/12 campaign, received the No.7 shirt as a reward and then, through a mixture of injuries and lapses in form, dissolved into anonymity in 2013, before encountering a minor-resurgence under Louis van Gaal.

His malaise at Old Trafford was largely underpinned by a pervasive level of uncertainty surrounding his role on the pitch. Was he a right winger? Was he a right back? Nobody – not even Valencia himself – was sure.

Under Jose Mourinho, however, his role in the first-team has become crystal clear – the Ecuadorian is the side’s unchallenged first choice right back, charged with the responsibility of providing width, attacking impetus and drilled crosses going forward, whilst also dealing with any threat that comes down Man United’s right hand side.

And as you can tell from the stats below per 90 minutes (via Squawka), this new clarity with regard to his role at Old Trafford has precipitated a radical surge in every aspect of his game. 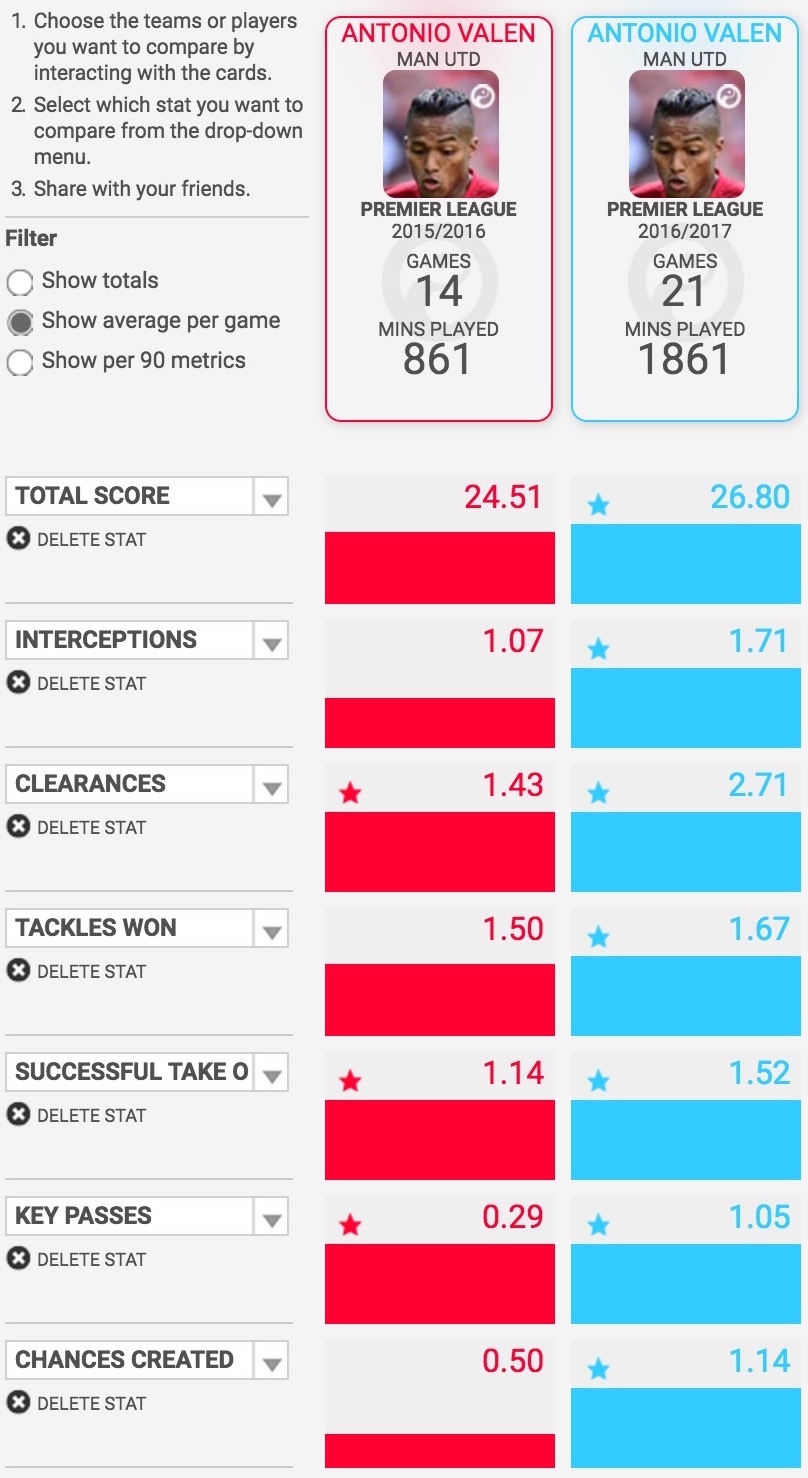 Valencia’s understanding of the right-back role has radically improved over the years with Sir Alex Ferguson, David Moyes and Louis van Gaal all placing him in this unnatural position on a number of occasions. His positional sense, decision making and judgement of when to pour forward has undergone a radical evolution.

The 31-year-old’s overall demeanour has remained the same throughout his career. He’s always ready to commit everything to the badge, regardless of context, every week, every game – that same stony, emotionless glare. His work ethic easily eclipses any other member of this squad, and following years of being largely ignored or criticised he is receiving the praise he deserves.

Not only is he better defensively but going forward as well. Valencia is creating more chances and has far more key passes; he looks up when he crosses now instead of mindlessly drilling them into the box and it’s made him a far more dangerous option for us on the right.

After proving so many people wrong with his improved performances at right-back this year, Valencia is almost certainly in the running be named the 2016/17 Sir Matt Busby Player of the Year – an award he won back in 2011/12 and one which nobody expected him to be in the running for ever again. That’s a testament to his own work ethic and United are certainly reaping the rewards.