When Jose Mourinho arrived at Manchester United over the summer, Ander Herrera had spent two years at Old Trafford without managing to find his ideal role within the starting XI.

Louis van Gaal used the Spaniard in a number of positions: as a deep-lying midfielder; as a No.10; as a forward-thinking playmaker sitting ahead of Michael Carrick in a diamond. And yet, at the end of it all, nobody really knew much more about Herrera’s raison d’être at Man United.

But Mourinho, in the space of a few months, eradicated any doubt surrounding the 27-year-old’s role, using him as a tenacious midfield battering ram alongside Paul Pogba and Michael Carrick to great effect.

And the chart below sheds light on Herrera’s superb renaissance at Old Trafford this season. 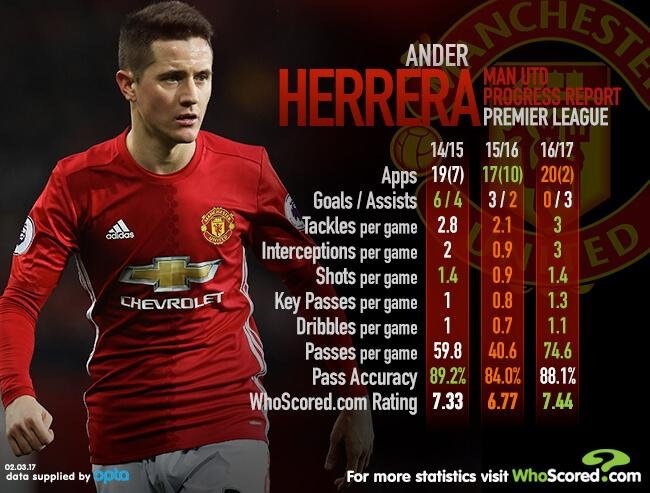 The change in Herrera’s style and persona on the pitch has been nothing short of revolutionary. But the process through which the Spaniard ascended to achieve his status as a fundamental first team regular was rather simple.

All Mourinho did, really, was hand the midfielder a clear role within the side – a fixed purpose, above anything. No ambiguities, no painstakingly long video replays, just one guideline that, if followed, would guarantee him a place in the starting XI: to charge around the pitch, gather the ball, harass opponents and drive forward at will all game, every game, without fail. And nobody can fault Herrera with how he has performed so far.