How could Manchester United line-up against Chelsea after injury crisis in attack?

Manchester United’s attack against Chelsea tonight is going to be a bit makeshift to say the least.

With no Zlatan Ibrahimovic, Wayne Rooney, Anthony Martial or Marcus Rashford, Jose Mourinho will have to come up with something new in attack but what will that look like? Here’s a potential line-up which I actually think doesn’t look too bad. 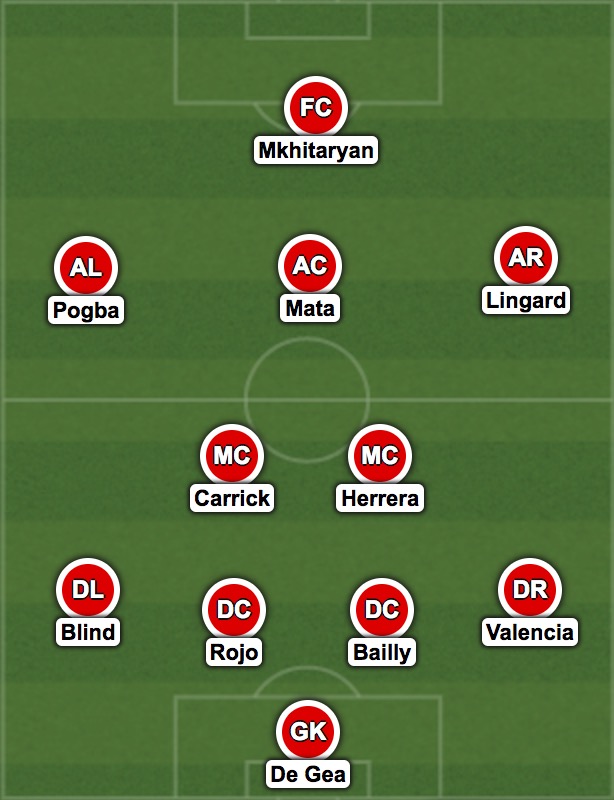 Henrikh Mkhitaryan should start up front. Not only is he the most clinical finisher we’ve still got available but his pace is going to be crucial wherever he plays. United won’t dominate possession against Chelsea, we are going to have to play through the lines fast and nobody is better suited to make the most of that than Mkhitaryan, least not if Paul Pogba can get some through-ball in behind.

Playing Pogba on the left might seem a bit of a curve ball but he played on the left of a midfield three at Juventus and often ran into those spaces, cutting inside like he always does. It wouldn’t be too different playing wide left so I think it would suit him quite well.

As for Jesse Lingard and Juan Mata, I’d be happy to see the pair start and Mata in particular. We’ll need him to control the game as much as possible because recycling possession against Chelsea to stop them from playing is going to be crucial as well if United are going to make it to the semi-final.

United are undoubtedly going to have a weakened team against Chelsea but as this potential line-up shows, there is still plenty of quality Mourinho can put out there.