Juan Mata, Antonio Valencia and Sergio Romero named in Team of the Week

Juan Mata, Antonio Valencia and Sergio Romero have all been named in UEFA’s official ‘Team of the Week’ following Manchester United’s 1-0 win over FC Rostov in the Europa League on Thursday.

Mata capped off a busy performance with the only goal of the game against the Russian side, with Valencia – deployed as a right wing back – also enjoying a relentlessly powerful display going forward.

Down the other end, Romero ensured that Mourinho’s men kept a clean sheet with three important saves, including a sensational stop from Christian Noboa’s free kick deep into injury time

The trio were subsequently handed a place in UEFA’s ‘Team of the Week’ following their exploits in the second leg against Rostov. 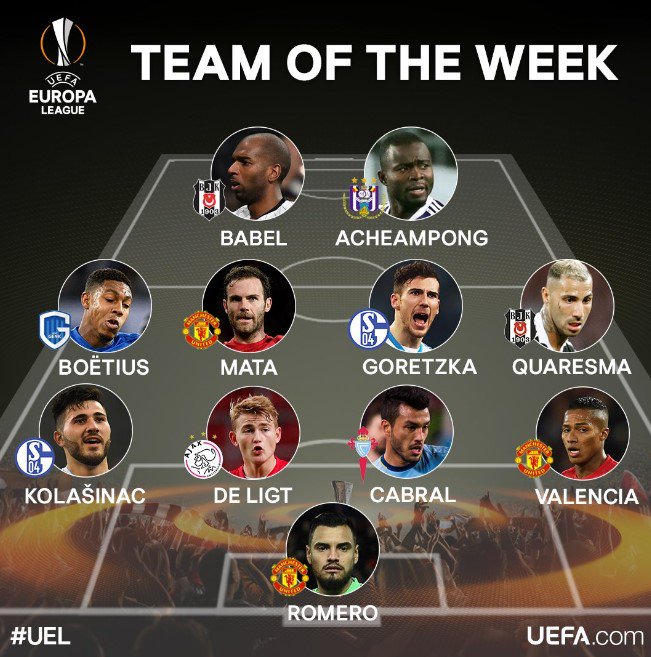 Mata and Valencia deservedly enjoyed most of the plaudits in the aftermath. The pair had been effervescent forces against a harder-to-break-down-than-you-think Rostov side, working tirelessly to find space in between the lines, and it was eventually down the avenue Valencia had bombarded that Man United’s opener came through Mata.

But it is worth dedicating a moment of attention to Romero as well. United fans, following that display against Swansea City back in August 2015, had largely lost any iota of confidence in the Argentina international, but his resurgence under Mourinho has been something that deserves recognition: eight clean sheets in 11 appearances, with just three goals conceded altogether. Following a shaky start he is, it seems, beginning to emerge as an ideal No.2 at Old Trafford.