Jose Mourinho made it clear soon after his side’s 1-0 win over Celta Vigo that, against Arsenal on Sunday, he would rest players that had featured the most over April.

Marcus Rashford‘s stunning free-kick against Celta handed Manchester United a 1-0 win in Spain and, more importantly, an incentive to dedicate their efforts solely towards winning their next two games in Europe.

The youngster, Eric Bailly, Antonio Valencia, Paul Pogba and Ander Herrera have all featured regularly over a hectic April period that has left Mourinho with a scathing injury crisis.

With that in mind, here is a potential XI for the game against Arsenal without some of Mourinho’s regular starters. 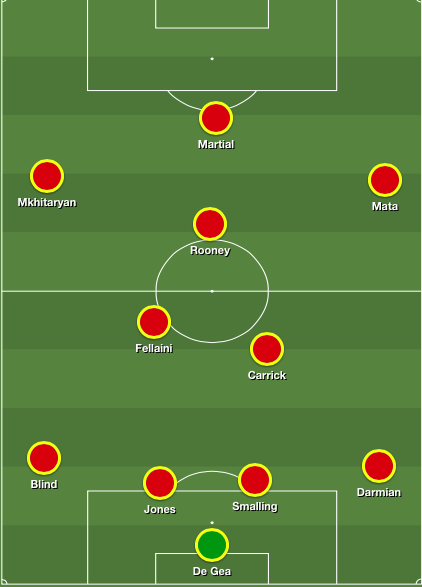 Juan Mata has done exceptionally well to recover from what seemed like a season-ending set-back to put himself on the line over the next few weeks and, while he didn’t feature in Spain, deserves a place in the starting XI at the Emirates over Jesse Lingard. Wayne Rooney, with Mourinho’s remarks in mind, will also most likely feature after remaining on the bench against Celta.

Both Chris Smalling and Phil Jones were included in the squad that travelled to Galicia, with the former coming on during the latter stages. Mourinho will be pleased to finally hand Bailly a rest after 12 straight starts in a United shirt, but may have to include Daley Blind once again after Ashley Young suffered a hamstring knock in Spain.