Matt Olosunde, Demetri Mitchell, Scott McTominay and Matthew Willock were all seen training with the Manchester United first team ahead of their second leg semi-final clash with Celta Vigo on Thursday.

Jose Mourinho handed both Axel Tuanzebe and McTominay Premier League debuts during his side’s 2-0 defeat to Arsenal on Sunday, with the former impressing from the start and the latter coming on for the dying stages.

And the Portuguese, ahead of the second leg with Celta, has included further youngsters in his first team plans. 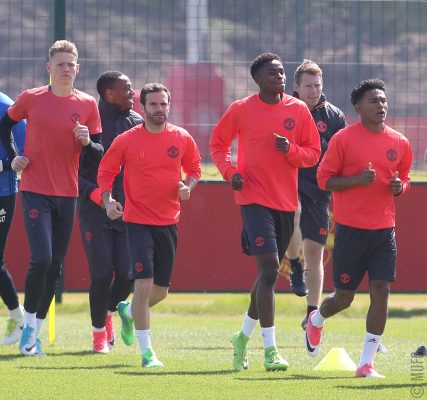 Louis van Gaal was often praised for accommodating youngsters in his first team during his time at Old Trafford, but this was for the exact same reason why Mourinho has handed Olosunde, Mitchell, McTominay and Willock places in the senior side today: a big, stinking, irreversible injury crisis.

Mourinho is not, unlike his predecessor, receiving any approving nods in his direction for including the quartet, mainly because when it comes to training – especially on the eve of a game – certain numbers are needed and, well, where else to you turn when six first team members are on the treatment table.

As for the youngsters themselves, they will view today’s session – alongside any further participation over the next few weeks – as an important step ahead of pre-season.