Marouane Fellaini, Henrikh Mkhitaryan and Antonio Valencia have all received a place in WhoScored’s ‘Team of the Week’ after reaching the Europa League final with Manchester United.

Fellaini powered home an important header after just 17 minutes against Celta Vigo and fought hard throughout, producing some important defensive headers as the home side held on to secure a date with Ajax in Stockholm.

Mkhitaryan recovered from a brief spell of anonymity to display some mesmerising touches forward, whilst Valencia, as usual, gave absolutely everything on the right hand side of defence and shut down the potentially threatening Pione Sisto.

The triumvirate, in turn, all received places in WhoScored’s ‘Team of the Week’ after reaching the final. 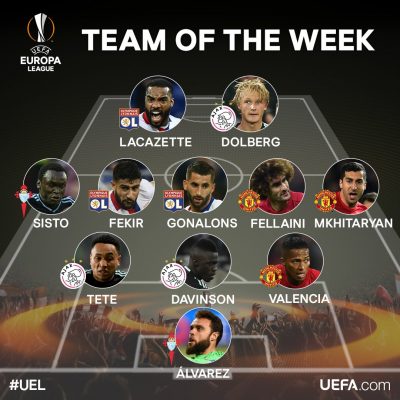 The ten minutes that followed Celta’s equaliser felt like an eternity – an eternity in an elevator bugged with a land-mine, only you don’t know where it is.

One can be forgiven, therefore, for forgetting that United actually enjoyed a positive period of play following their first goal – expertly guided home by the rampaging afro of Fellaini. Mkhitaryan, for one, was a silky, mazy influence on the ball, skipping between black shirts and firing passes all over the pitch during the opening stages.

The nature of Valencia’s performance goes without saying. He is the only player in this current side that has, week in, week out, produced the same standard of performance, and it was business as usual on the right hand side as Sisto found himself nullified by the Ecuadorian.