Jose Mourinho recently revealed that as many as seven youngsters could feature against Crystal Palace in the Premier League on Sunday.

The Portuguese, keen on resting as many players as possible just three days before the Europa League final, confirmed that Axel Tuanzebe, Scott McTominay, Demetri Mitchell, Josh Harrop, Matt Willock, Joel Pereira and Zachary Dearnley would be included in the match-day squad.

Paul Pogba is set for a return from compassionate leave, while Eric Bailly will also definitely start in light of missing the clash in Stockholm through suspension.

With that in mind, here is a potential XI ahead of the contest with Sam Allardyce’s men including debuts for Mitchell, Willock and Harrop. 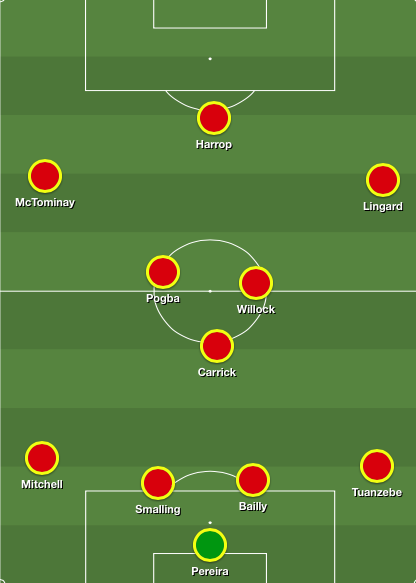 Mitchell has received a number of places on the bench in recent weeks and, with Daley Blind and Matteo Darmian both in line to start against Ajax, he could finally receive his chance to impress at Old Trafford.

Pogba’s return will add some much-needed impetus in midfield, but with Ander Herrera set to receive a rest Mourinho will want another workhorse alongside the Frenchman, which could pave the way for Matt Willock to make a first start. The youngster has been a regular feature in the Under 23 set-up for some time and centres his game around an indefatigable, workmanlike approach.

Josh Harrop, you sense, has to finally receive a chance up front after claiming a hat-trick against Tottenham Hotspur earlier this week.