Paul Pogba has been handed a place in WhoScored’s Europa League Team of the Season after claiming the trophy in Stockholm on Wednesday.

The Frenchman, the only Manchester United player to play all 15 European games this season, opened the scoring against Peter Bosz’s men after his strike deflected off Davison Sanchez in the first half.

He then went on to control proceedings in the middle, ensuring that the supply route to Davy Klaassen and Co was cut off whilst inflicting plenty of damage moving forward.

Pogba was, in turn, unsurprisingly handed a place in WhoScored’s Europa League Team of the Season following another bombastic display. 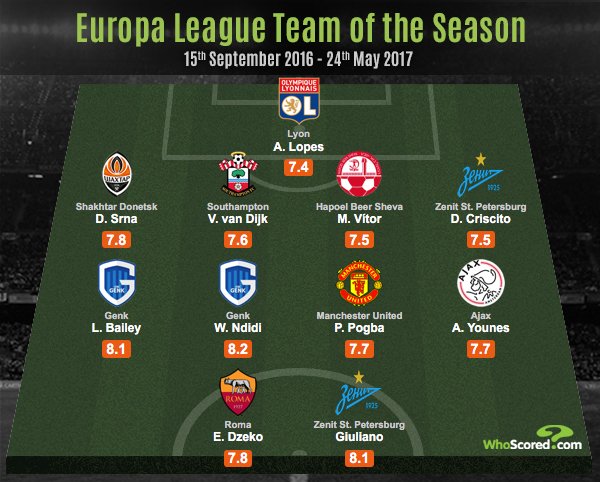 Yes, the strike was going well wide, but that goal was entirely Pogba’s making. Those who prevail in finals are, more often than not, the ones who take a chance early on, pulling out something bold at a time where everybody else settles for just feeling their way into a game.

This is what Mourinho paid for: big contributions in big games – his presence throughout was unmistakeable, and such has been the case for the entirety of United’s Europa League campaign. Opponents have simply bounced off him, unable to understand – let alone counteract – Pogba’s tantalising mixture of skill and power. Make no mistake: this has been his competition.