Kylian Mbappe will reject a move away from Monaco this summer despite world-record offers from European giants Real Madrid, Manchester City and Manchester United, according to reports.

The 18-year-old is one of the hottest players in football following his incredible breakthrough at Monaco and has attracted interest from Europe’s elite.

However, he’s looking to build on his career as the front page of AS references the €135m gambit from Real as well as a £113m bid from United and a £105m offer from City. 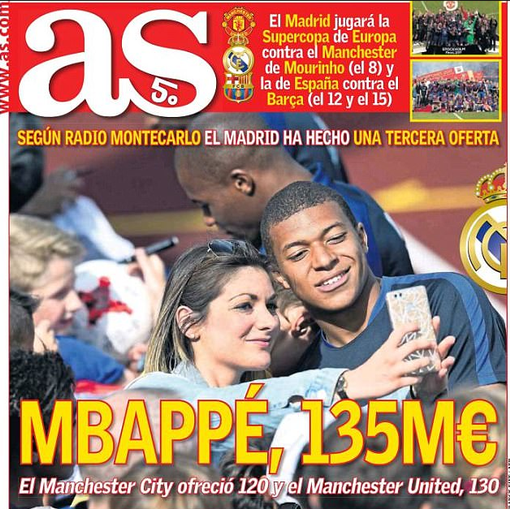 He claims he’s aiming for game-time next season and won’t be taking the opportunity to leave Ligue 1 this summer with his eyes set on a World Cup place in Russia next summer.

Monaco won their first title in 17 years this season and are set to offer him an improved contract to keep him at the club and reflect upon his status as the world’s leading teenage centre-forward prospect.

He’s scored 26 goals this season and was the driving factor behind the club’s run to the Champions League semi-finals.

Mbappe is on international duty with France ahead of their World Cup qualifier against Sweden in Stockholm and will be looking to continue his impressive showings as he hopes to nail his place in the side for Les Bleus.