Jose Mourinho has once again set about securing his major transfer targets before pre-season starts and the starting XI for next season is already starting to look tantalising.

Manchester United officially announced on Wednesday that Benfica defender Victor Lindelof had a completed a £30.7m move to Old Trafford on a four year contract – Mourinho’s first signing of the transfer window.

Numerous reports have suggested that a second arrival in the form of Real Madrid striker Alvaro Morata will follow shortly after a “total agreement” was agreed with the La Liga champions this week.

Here is a potential XI for next season featuring the pair, who will join the squad before pre-season. 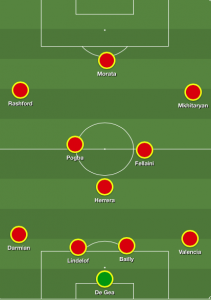 There remains a question of whether Mourinho, following the signing of Morata, will opt for a system tweak to keep both the Spaniard and Marcus Rashford – exceptional at No.9 following Zlatan Ibrahimovic‘s injury – central, but history dictates that the 54-year-old prefers using just one striker.

Supporters will want to see the teenager, who made 53 appearances last season, work in close conjunction with Morata and create space for the deadly 24-year-old to punish opponents. Henrikh Mkhitaryan, featuring on the other side, will be expected to use his exceptional craft to achieve similar ends.

Meanwhile, that centre back partnership – with Matteo Darmian providing discipline and Antonio Valencia bombing forward on each side – could be intractable and, more importantly, there to stay for some time.