Home » Red Thoughts: Who should Manchester United sign this summer?

Red Thoughts: Who should Manchester United sign this summer?

With Victor Lindelof already in the bag, the Red Thoughts team discuss other potential targets and discuss what they can bring to the team.

CARL: I would sign Fabinho. He’s versatile, powerful and intelligent – this guy would compliment Pogba and Herrera beautifully in centre midfield, and there’s the added bonus that he’s also one of the prolific goalscoring CDMs you can find. I think I saw somewhere that he’s scored 10 goals in 50 games. Outstanding for a holding player. He’s got a bit of everything in his locker. I’m a fan.

Secondly, I like Morata. We need a clinical finisher and this guy’s finishing stats are better than all the other strikers we are linked to this Summer, barring Mbappe. If last season was anything to go by then we should create plenty of scoring opportunities for him, which can only add up to a lot of goals. He’s athletic, well-rounded, a great team player and young enough to lead the line for many years to come.

I would also go for James Rodriguez. He’s a significant upgrade on our No.10 options and an exciting addition to the squad. I like his invention and I like his set piece delivery qualities, which is an area in which we could do with a boost. I think we will push for Dybala in this window, but I think we’ll probably fail and Rodriguez could be our fallback.

COREY: I think we still need a defensive midfielder and a right winger. (I am assuming that we will definitely get a striker either in Morata or someone else).

I have heard a lot of great things about Fabinho, and there seems to be a lot of excitement surrounding him. I have not seen too much of him, but from what I have seen, I think he would be a great acquisition.

I also think we need a true right winger. On the left we play Martial or Rashford. They do an excellent job of staying out wide when necessary, and cutting in for the shot when necessary. They provide width and pace when needed, but also contribute with goals. I know eventually we would all like to see them moved to centre forward, but for the time being they are doing a job for us on the left side of the field. I cannot say the same for Mata or Mhkitaryan on the right. It is obvious they want to constantly drift in towards the middle and get on the ball. we have been lucky that Valencia is such a machine and can cover so much ground, as he basically operates on the right side of the field on his own.

People say we need goals, and I agree with them. But those goals don’t have to come solely from our strikers. If United had one problem last season, it was that we relied too heavily on Zlatan. Getting players that can contribute goals from the midfield would take a lot of pressure off our forwards.

If we get Morata, who as a striker we would hope gets at least 20 goals a season, with Bale on one wing, and Rashford on the other both contributing goals and assists, then Pogba and Herrera getting about 10 goals each, we will be in a far better place. Fabinho will allow Herrera and Pogba to push forward.

Now this is all assuming Mou plays a 4-3-3; if we go 4-2-3-1, I still think Pogba playing alongside Fabinho will allow Pogba to push forward. Then we can finally play Mata or Mhkitaryan as our number 10. They will naturally want to occupy that space anyway, why do we keep trying to play them out wide? 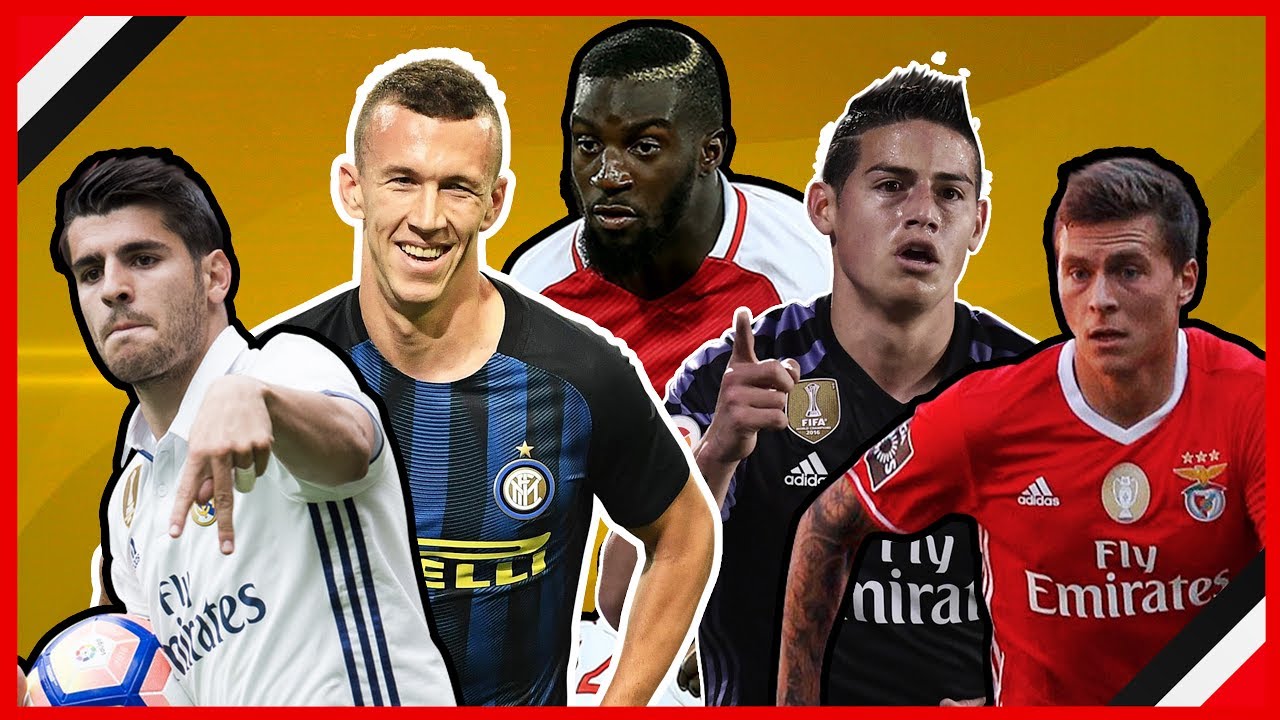 CARL: Mhki will likely play RW next season and I’m fine with that. I don’t see a problem with him drifting in a lot, as long as it pays dividends. If he delivers anything like the numbers of his second season at Dortmund playing in that position, then no worries. Mourinho wants Perisic and he’s a right footer who usually plays on the left because he too likes to drift in a lot. We delivered a high number of crosses into the box last season and were solid defensively, so the stats suggest wingers drifting in didn’t do us any harm. We certainly need more goals though, and if Perisic/Morata are to be our only offensive signings to play again in a 4-3-3 then I’d be worried to be honest. It will be difficult in itself for Morata to rival the goal tally of Zlatan up top, so even if he manages to do that then you’d worry where the extra goals will come from that we lacked last season. Perisic is not exactly known for his high goal return. To be honest, as much as I love the guy, I think if we get a quality No.10 like James, Herrera may need to be sacrificed when we get in a specialist holding midfielder. Unless Herrera can up his goal return, then I think it’s difficult to cater for him as we need to find more goalscoring options on the pitch. I too would love to see Bale sign and playing down our RW and I’d also feel comfortable sticking with the 4-3-3 in that case, but that’s not likely to happen.

JIM: Bakayoko or Fabinho. Both of them are superb midfielders who could fit into the Carrick role really well.

RICK: I’d buy Belotti, Perisic and Fabinho in addition to Morata. We need a striker to bag some goals and clearly Rashford and Martial can’t be relied upon yet to do that. Belotti is now playing and scoring for his national team; his attributes mean that switching to the PL shouldn’t be too much of a problem. He’ll just need to adjust to the pace of the league, but in terms of physicality and finishing, he’s already got it.

We need an out and out winger, we’ve been crying out for one for the past few seasons and Perisic fills that role. He’s also a goal scorer and can play either wing due to being two footed.

Fabinho is multitalented and would mostly be used in the Carrick role to free up Herrera and Pogba and protect the defence. He could also be used as RB cover, due to his versatility. Lastly Morata and Belotti would share the goalscoring burden, as both come from a different league. If one doesn’t settle as quickly, at least there won’t be too much pressure on him.

1. Perisic – Mourinho likes to play with a target man so we need a good old fashioned winger to whip in the crosses. Apart from crossing the ball, he also score goals and be has the pace to stretch opponent’s defence.

2. Belotti – United put in a lot of crosses per game last season, even though a lot of them were ineffective. Belotti scored 10 goals with his head, I think that’s the highest in Europe’s top flight leagues, and with the crosses from United’s wingers and fullbacks (hopefully it’ll be more effective with Perisic) he could put quite a number of them in the back of the net. He’s also aggressive in his attack and he has a high work rate. He’s also a target man.

4. Fabinho – The best formation for getting the best out of Pogba is a 3 man midfield with him being the creative one who does the linkup with attack. This means we need a solid and reliable DM behind Pogba to partner Herrera and Fabinho is one of the best out there. He’s strong, young, he can defend and he can pass very well. He’s also a good PK taker.

4. James – If Mourinho wants to continue playing 4-2-3-1 then we need another attacking midfielder and James Rodriguez is one of the best out there. Even though he hasn’t been playing much for Madrid, he’s a quality player and he’ll add more quality to our team in the final third. He can score goals or create goal-scoring opportunities for teammates. We’ll also make a lot of money on him from shirt sales as he’s a highly marketable player, so I’m sure Ed would love to sign him too.

5. Rose – I think one thing all United fans can agree on is that Shaw hasn’t been at his best since his horrific leg break and nobody knows for sure if he’ll be at his best next season or not. Darmian was solid defensively last season but his attacking ability is very poor, so we need someone good at both. Danny Rose has been excellent for Tottenham for the past few seasons, he is fast, he can defend properly and he can attack properly. We could maybe include Shaw in the deal, which could make Levy interested in doing business with us.

My last one is my quality backup option: 6. Renato Sanches – He’s isn’t getting enough playing time at Bayern due to the fact that they have a lot of midfielders and could sign even more. Sanches is a quality midfielder who is very young and strong. He can play as a box to box midfielder and also play as DM.

BETS: I don’t think we need any full backs. Tony V is undroppable at RB and we have Darmian as a really good backup. If we get Luke Shaw playing well again, he is a world class option on the left, with again Darmian and Blind as backups.

We need a good holding midfielder and we should perhaps go for Matic. Mou likes him and they have worked well together in the past. Rumour has it he’s unsettled at Chelsea, so there may be a chance. Fabinho is a younger, more versatile option but sadly I don’t think there is genuine pursuit on our part.

Next, I honestly think there’s a chance we could get Bale. Real will want a marquee signing, especially after their transfer ban, and if it’s going to be Mbappe or Hazard they might be persuaded to sell Bale to help fund it (unless we help them fund it by buying Morata). Bale is made for United and still only 27 – he’d be my dream signing this summer. If not, or ideally, as well as, let’s go for James. I think he’s a brilliant player and still pretty young. Rumour on that one is that Mourinho has been told he has to get rid of Rooney if he wants to sign James, because Adidas will only allow a James deal to go through if he can have the number 10 shirt. Crazy but there’s probably a ring of truth to it.

As for Morata, for the same reason people think he’s a better option than Lukaku (i.e. first touch and needing space), I think he’s a risk, as I’ve read and observed that he has the same issue. I also wonder why Madrid would let a local lad go if they thought he was good enough. So I worry he won’t adapt well to the pace of the Prem. Also, would Madrid really sell us 3 players in the same window? Bale, James and Morata? So  I would have gone for Lukaku as a proven PL striker, but that is looking unlikely now.