Home » How could Manchester United line-up if Cristiano Ronaldo re-signed?

How could Manchester United line-up if Cristiano Ronaldo re-signed?

Cristiano Ronaldo has expressed a desire to leave Real Madrid and any Manchester United fan is lying through their teeth if they aren’t currently imagining him emerging from the Old Trafford tunnel next season.

The Portuguese arrived at Madrid back in 2009 for a fee of £80m and has since gone on to claim 404 goals in 392 games, winning three Champions League titles in the process.

Sky Sports have reported that the 32-year-old, who recently admitted to missing life in Manchester, no longer wants to play in La Liga.

Here is a potential XI with Ronaldo that places him at the centre of Jose Mourinho‘s line-up for next season. 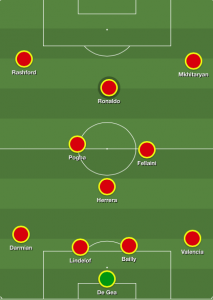 Using Ronaldo as a false No.9 is not, I admit, something that managers have really done in the past. Zinedine Zidane has deployed the 32-year-old primarily as a striker this season alongside Karim Benzema, but Mourinho’s propensity for only using one up front rules out this particular approach.

Having the Portuguese lie slightly deeper, on the other hand, would give him a chance to exert his influence more regularly than if he was the last man up front. With Paul Pogba pulling the strings and shifting the ball forward quickly, Ronaldo could sit slightly off the central defence, luring them into a sense of uncertainty as to whether they should commit or not, and run at opponents from deep while the likes of Marcus Rashford and Henrikh Mkhitaryan make use of the space vacated by defenders hopelessly chasing after the current Ballon D’Or holder.

This is, of course, just my take on how Ronaldo would be best used, and I would be keen to see how you, the reader, might approach the issue in the comments section.