His agent Maik Barthel told German football magazine Kicker that the Pole “was disappointed as I have ever seen him before” after Carlo Ancelotti made no attempt to help him win the top scorer award, which went to Pierre Eric Aubameyang instead.

And according to sources at Sky Sports, Man United have contacted the 28-year-old’s representatives over a potential move to Old Trafford.

Here is a potential XI for next season with Lewandowski occupying the No.9 role. 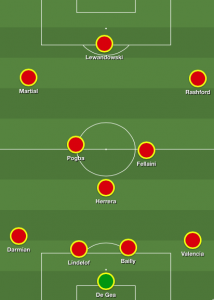 The striker can, of course, occasionally do it on his own. At 6ft 1, he can impose himself physically on defenders and display a surprising amount of pace once he gets going, and there have been times when he has literally stormed through a group of defenders before ruthlessly adding to his impressive tally.

But that only tells some of the story: Lewandowski can hold up the ball better than most people and a lot of Bayern’s success going forward is determined by smart lay-offs to the likes of Arjen Robben, Franck Ribery and Kingsley Coman.

Pep Guardiola always placed emphasis on a zonal attacking approach at Bayern, but Carlo Ancelotti has opted for a system that brings the aforementioned wide players using the Pole as a more direct reference point, and it has paid dividends. Doing the same with Anthony Martial and Marcus Rashford – most threatening when steaming into the box from a diagonal angle – would, you sense, cause plenty of damage.

Jesse Lingard could move on loan to Everton...